The Institution profile record needs to be returned by all HEIs and is made up of two key pieces of information, the campuses and academic cost centres of HEIs. The data collected in this record will be used to validate the Student, Staff and Finance HE-BCI records as well as providing benchmarking material for heidi.

The fields collected in this return are described in the 'Data items' document in the 'Data specification' section of the manual homepage, in a manner common to other records.

Campus information is required for all campuses of the reporting institution which are located within the UK. Institutions are also strongly encouraged to identify campuses located outside the UK so that this information can be used in data quality checking of the Aggregate offshore record at HESA.

A separate campus identifier should be used if a substantial number of staff are located on a campus at a significant distance from where the main institution is based, such that it would be regarded as not being in the same city/town. Greater London can be treated as a single entity.

A separate campus identifier should be used when a merger takes place, to identify any merged institutions as separate campuses if they otherwise fit the criteria specified.

Although campus information is compulsory, in the majority of cases an institution will return a single campus with the generic value 'A', indicating the main campus or entire institution.

HEFCE expects separate campus identifiers for any part of the institution funded separately e.g. 0151 University of London - Institutes and activites, even where these do not meet the other criteria.

Provision of data regarding the mappings of academic departments to cost centres is compulsory for institutions in England, and optional for institutions in Wales, Scotland and Northern Ireland. The ability for HEIs to return data about their organisational structures, and where their departments 'sit', was indicated to be useful for the sector during a consultation exercise in early 2011. The option to return mappings of departments to other institutional structures is available to all, but is not compulsory.

Assigning departments to academic cost centres should be done on the basis of the full-time equivalence (FTE) of academic staff, and not headcount.

For the Institution profile record, assigning departments to academic cost centres should be done on the basis of the full-time equivalence of academic staff, rather than that of student numbers. This is consistent with the HEFCE guidance issued to institutions in England in their previous allocation exercise. The allocations of cost centres should include all academic staff that are active in the reporting period, including those with contracts involving teaching and/or research, and both non-atypical and atypical contracts.

HEFCE established five fundamental criteria for grouping departments into cost centres, which are as follows:

Cost centres should comprise of groups of staff whose attributes and activities collectively satisfy all the above criteria.

In order to map academic cost centres to departments on an institutional level, it is important to consider the definition of 'department'. The report 'Enabling Benchmarking Excellence' suggested some common themes:

Within the Institution profile record, an institution may identify their departments using a free-text string of up to 100 characters, in the field AcademicCostCentres.DEPARTMENT.

Capture of this data is intended to provide useful contextual data for benchmarking.

Two different representations of the same institutional structure, and how those might map to these three fields, are shown below: 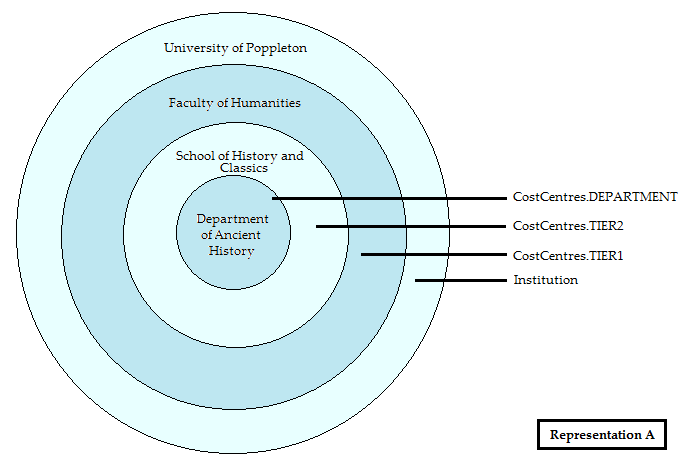 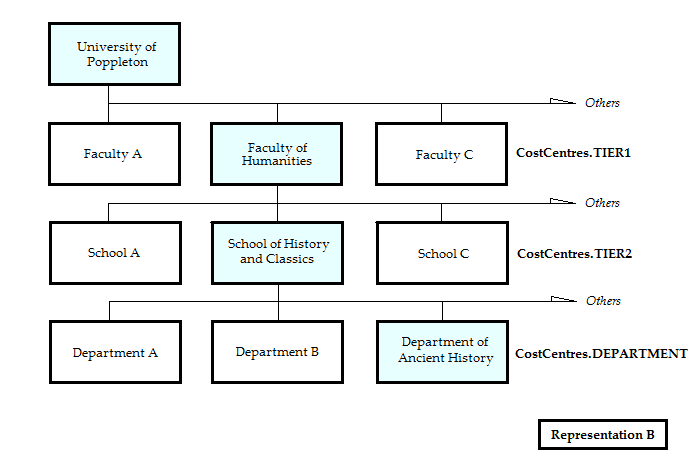 Both of the examples above could be recorded as follows:

Not all institutions will have three tiers of organisational structure - some may have more, some fewer. It is recommended that these fields are populated with appropriate tiers, even if these may not fully capture the nature of an institution with a complicated structure.

For that reason, the data collected for each cost centre includes:

The act of assigning the staff within a department to each academic cost centre, and producing the resulting AcademicCostCentres.PROPACC values, will also give the values that would correspond to the proportion of staff from each department in each cost centre (AcademicCostCentres.PROPDEPT). Even where a department is split across cost centres individual members of academic staff will normally be allocated to only one of the cost centres. The exception would be where a staff member has two or more distinct roles which naturally fall into different cost centres. To use the 'History' example from above, the 'Department of Ancient History' may allocate their staff half to the 'History' cost centre and half to 'Classics'. The 'Department of Classical Studies' might allocate all their staff simply to the 'Classics' cost centre:

In this example, the two cost centres populated from the Department of Ancient History have equal allocations of staff. This gives a value of 50% for AcademicCostCentres.PROPACC for each mapping. The cost centre of 'History' does not have staff from any other department - the AcademicCostCentres.PROPDEPT value for this is 100%. The 'Classics' cost centre, however, also has staff from the Department of Classical Studies on a 66.7%:33.3% basis. This can be summarised as follows:

It is recognised that precise percentages may vary year on year due to minor changes in staff recruitment, it is not expected that institutions will recalculate percentages each year. Rather, it is expected that institutions will review the mappings to ensure they are broadly correct and only make updates where it is found that the data are no longer representative, for example where there have been significant changes to staff numbers or organisational structure. A degree of forecasting will be required for contracts that commence between June and the end of July.

A further, more detailed example may be found in the Further guidance on calculating proportions document.