The HE-BCI record is the main vehicle for measuring the volume and direction of interactions between UK HEPs and business and the wider community. The record has collected data for each academic year from 1999/2000.

The HE-BCI record collects information regarding the whole HEP rather than any constituent team or function. There may be numerous examples of HEPs with one department engaging with international partners in research projects while another is embedded in regional economic development; in such circumstance it is expected that the respondent provides the most useful summary within the format of the HE-BCI record.

Part A of the HE-BCI record is designed to collect information on the infrastructure, capacity and strategy of HEPs. Data here are less likely to be considered as potential funding metrics but do provide invaluable information (at the HEP as well as regional and national levels) for HEPs and policy makers alike. Overall it is expected that the senior staff responsible for knowledge exchange activity would provide informative responses under Part A.

It is important for the record to distinguish between types of partner (such as between private businesses and the public sector). This allows for the understanding that there may be a number of indirect economic benefits brought about by these interactions that may differ by organisation type and industry sector.

a. To assist in the production of knowledge exchange activity information.

Related bodies in the UK draw on HE-BCI record data to inform funding of knowledge exchange and this remains one of the key drivers for collection of the information. In addition, a range of other public and project funders such as, BEIS and UK Research and Innovation (UKRI) use the HE-BCI record to produce key performance indicators and also for monitoring and international benchmarking. HEFCW use the data for producing a set of National Measures, as well as for funding. It is used for monitoring a providers Fee and Access Plan Target.

The HE-BCI record covers a range of activities: from the commercialism of new knowledge, through to the delivery of professional training, consultancy and services, to activities intended to have direct social benefits. The term ‘Business' in the context of the HE-BCI record refers to both public and private sector partners of all sizes and sectors, with which HEPs have interactions.

HE-BCI seeks to use financial and other data as a proxy for the HEP's engagement with the economy and society. Therefore, while there are areas of apparent overlap between the Finance and the HE-BCI records, each collect different data for different reasons. The same activity (for example contract research income) may be returned under both records but there should be no assumption that all external income has a place within HE-BCI (as is the case for the Finance record).

Uniformity of returns and audit

The HE-BCI record may be subject to audit by the funding bodies (excluding HEFCW). It is imperative that the HE-BCI record is completed uniformly, and so all HEPs should follow the notes of guidance provided. This will then allow the data to be compiled in a consistent manner and for meaningful interpretations of the data to be made.

HEPs should be confident of the total income from knowledge-related business interactions with the majority of data returned under appropriate headings even if it is not possible in a small minority of cases to draw exact distinctions between categories such as consultancy and facilities and equipment-related services.

In order to achieve a balance between data needs for HEPs and funding bodies, HE-BCI record guidance allows for a certain degree of expert estimation in certain parts of the return, namely where totals are to be disaggregated into subcategories. Where such estimation takes place, HEPs are required to keep records of the details and it is expected that they will be able to make provision for this data within their data capturing systems. Data from the HE-BCI record that is used to inform funding is likely to be included alongside other data as part of the general funding data audits; this is already happening in Wales.

When completing the HE-BCI, please use the same conventions as required for the completion of the HESA Finance record. As per these conventions VAT charged to customers should not be included in income figures collected in HE-BCI.

For the HE-BCI record (Tables 1 to 5) it is income rather than fEC which should be returned.

Data should not be returned more than once in Tables 1 to 5, except for the specific sub-set of questions regarding regional partners and overseas interactions. Where financial data can be recorded in HE-BCI, it should always be returned as reported in the HEP's audited accounts.

Income from donations and endowments (as collected in the HESA Finance Record) would not normally be included within the HE-BCI return.

Where HEPs are asked to split values between SMEs, other (non-SME) commercial businesses and non-commercial organisations and the HEP has hundreds of contracts to return, it is acceptable for the HEP to take a representative sample of contracts in order to determine the split between these 3 categories, and then scale up.

The diagrams at the end of this section illustrate whether different categories of income can be returned and which table that they can be attributed to. These examples are illustrative and do not represent some of the more complex arrangements.

Where the HEP’s systems do not allow analysis of partner type, it is permissible to take representative samples and scale for the return. In this case, in the event of audit, the focus will be on HEPs having robust and valid processes to return such figures.

For the purposes of the HE-BCI record section of the return, research is defined as ‘original investigation undertaken in order to gain knowledge and understanding'. This definition excludes routine testing and analysis and the development of teaching materials that do not embody original research. 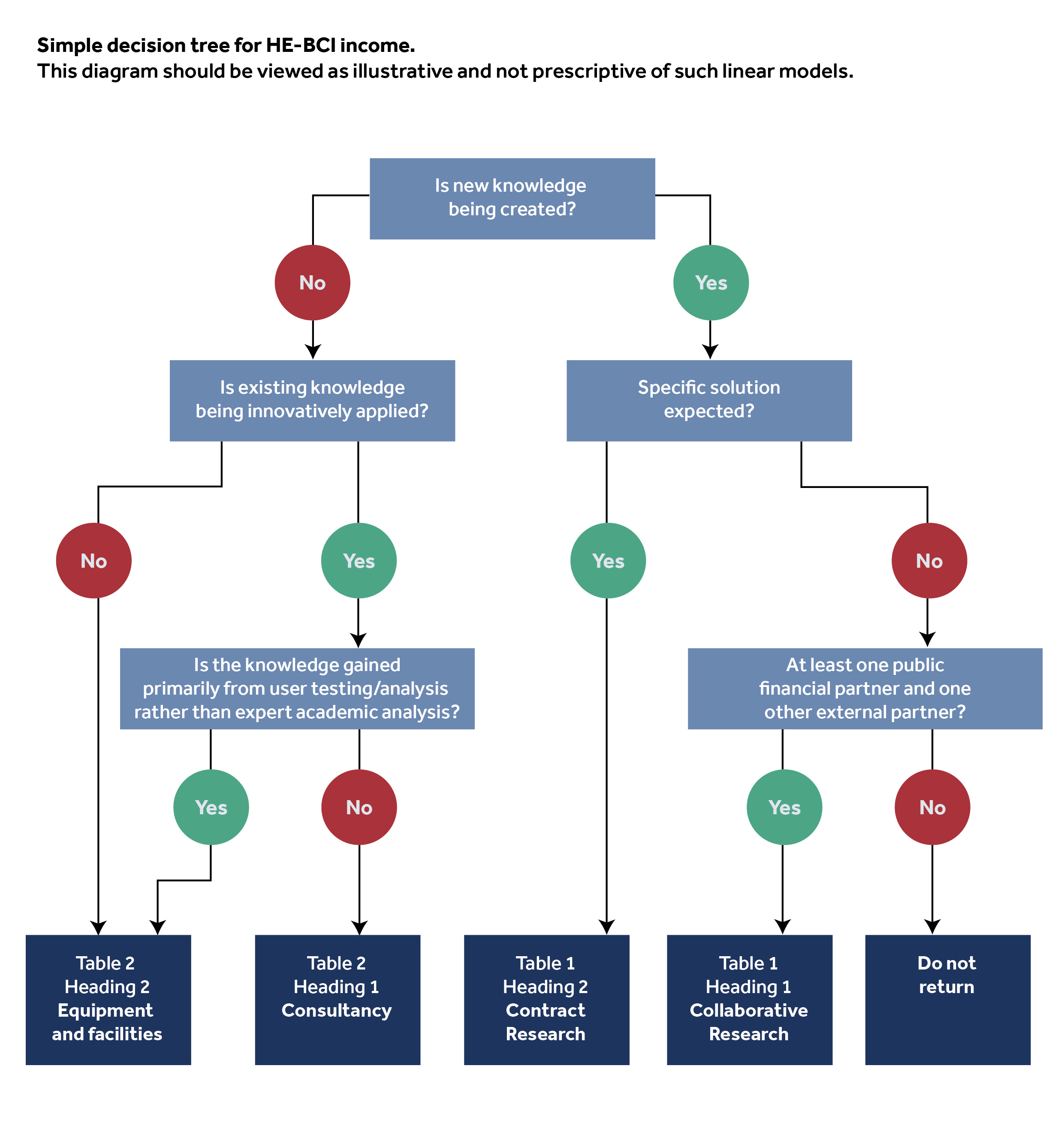 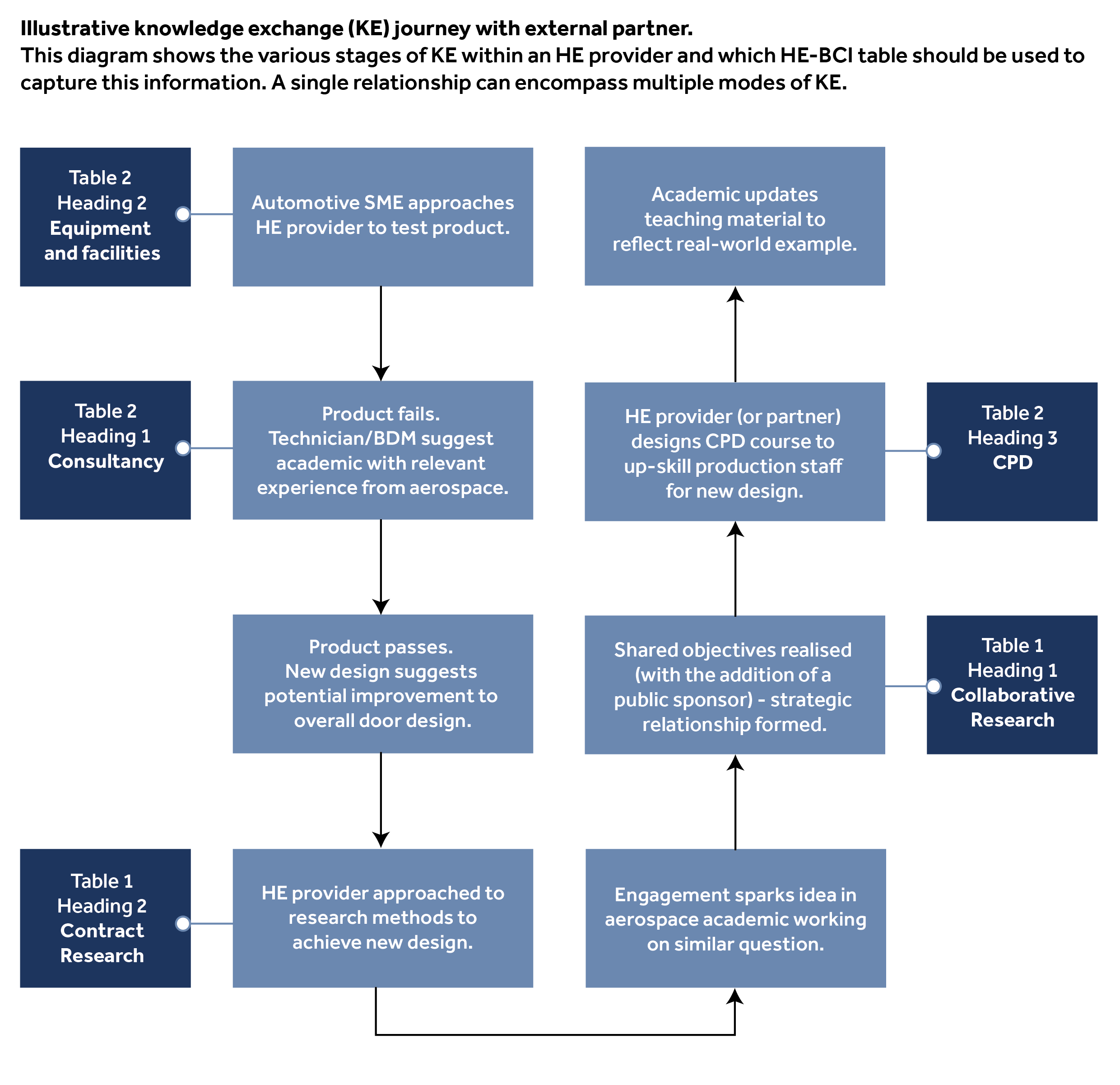