Section 4: Is our measure of deprivation likely to be correlated with income?

Although we do not hold individual or small area level data on income, this does not completely prevent us from examining the extent to which our measure may be correlated with it. As we do have household income estimates at the MSOA domain for England and Wales, we can see whether there is any clear pattern between our measure and net equivalised weekly household income after housing costs. We utilise this measure of income, as the level of resource available to a family to participate in society (and hence the extent of disadvantage they are facing) can only be truly determined once fixed costs, such as mortgage or rent payments, are paid. In England, the Pearson’s correlation coefficient between the MSOA income variable and our (continuous) measure is -0.70, with the corresponding figure in Wales being -0.58. Figures 2 and 3 provide a visualisation of the relationship for both nations, where our measure is categorised into deciles.

Figure 2: The relationship between net equivalised weekly household income after housing costs (at MSOA level) and our measure of deprivation in England 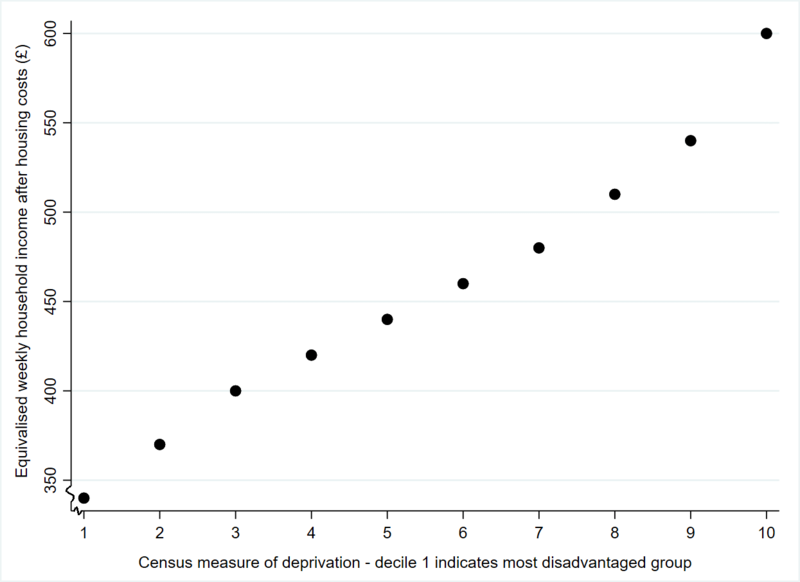 Figure 3: The relationship between net equivalised weekly household income after housing costs (at MSOA level) and our measure of deprivation in Wales 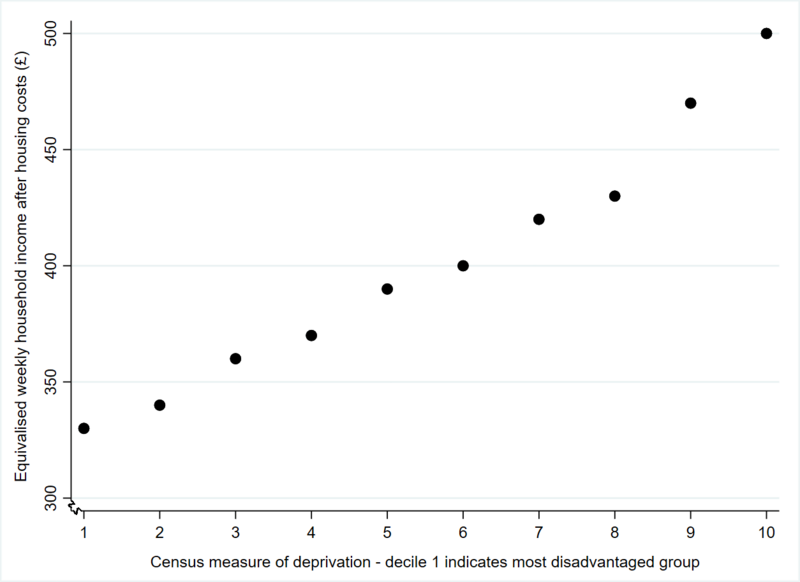 While we do not have similar income data for Scotland and Northern Ireland, we can utilise some of the other Census variables in our dataset to get a better understanding of whether our measure is likely to be associated with low income across the whole of the UK. We begin by considering the link between our measure of deprivation and the median age. Francis-Devine (2021) illustrates the quadratic relationship that exists between income and age in the UK, with individuals experiencing their highest earnings in their forties. The Census provides us with information on the median age of residents in each output area. Figure 4 explores the relationship between our deprivation index and the age of residents, with the output areas falling into the most deprived deciles tending to display a younger age profile. Based on research evidence on how age and income relate, we would therefore expect disadvantaged localities according to our measure to have residents with lower levels of income.

Figure 4: The relationship between age and our measure of deprivation across the UK 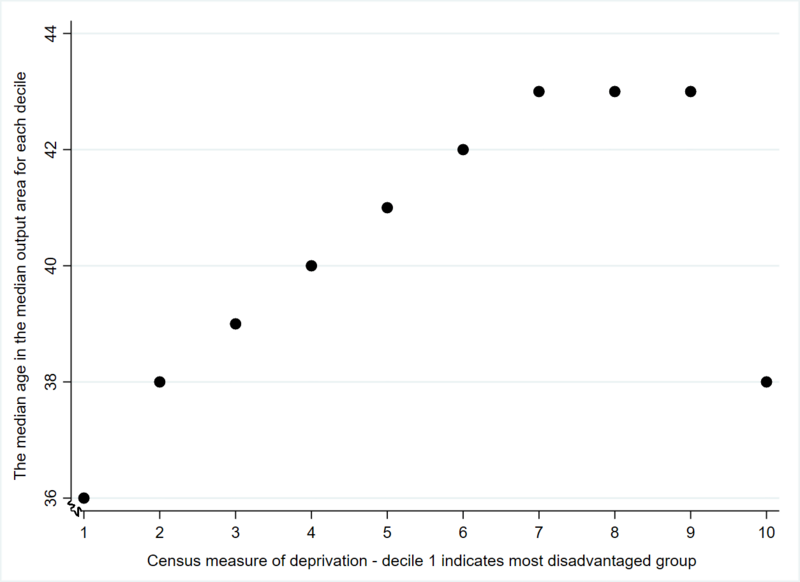 Furthermore, we utilise information on household composition to develop a variable that identifies the proportion of lone parents (with either dependent or non-dependent children) in each output area. The report by HM Government (2014) notes that single-parent families are more likely to encounter poverty, with reasons for this potentially including lone parents leaving the labour market following separation. Figure 5 demonstrates that the output areas in the most disadvantaged deciles of our deprivation measure have a higher average proportion of lone parent families.

Figure 5: The relationship between household composition and our measure of deprivation across the UK 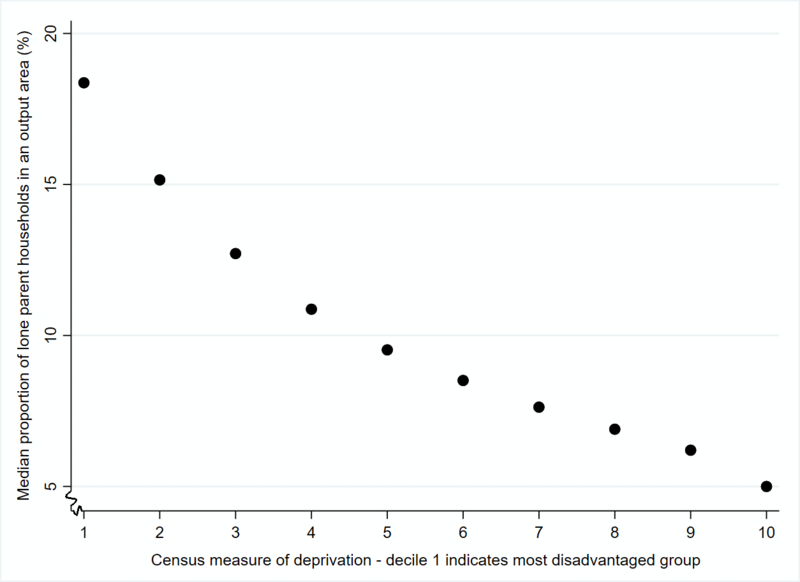 Table 26 in ONS (2022) highlights that those in social housing often have the lowest disposable incomes, while reports by the Ministry of Housing, Communities and Local Government (2020) and Scottish Government (2019b) indicate that access to internet among home owners and those privately renting is quite similar, but evidently lower among those in social housing. That is, those living in social housing appear to be more likely to experience forms of material deprivation. Our Census variable on housing tenure allows us to create a variable that corresponds to the proportion of households in an output area that are in social housing. In Figure 6 below, we see that there is a clear link between our deprivation measure and housing tenure, with the average proportion of households in social housing rising as we move from the least deprived deciles to those that represent the most disadvantaged output areas.

Figure 6: The relationship between housing tenure and our measure of deprivation across the UK 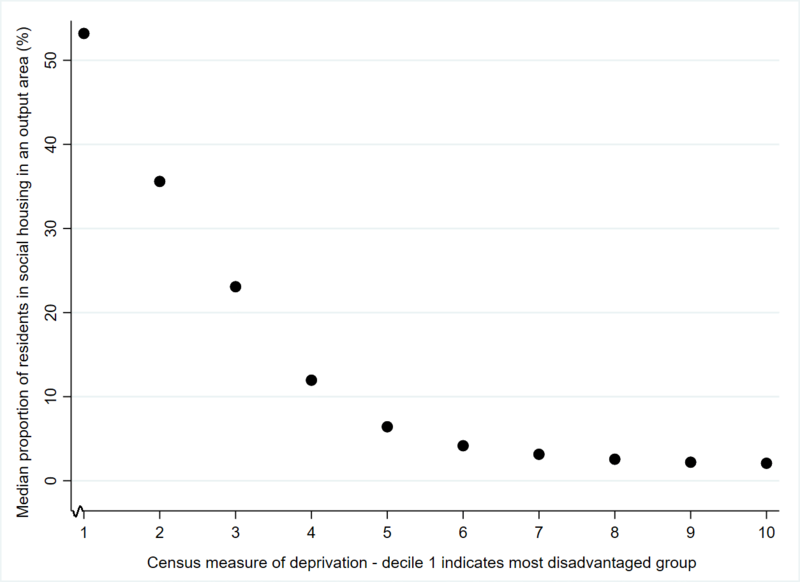 Finally, we already pointed out The Health Foundation (2020) study on the correlation between poor health and income, so we use the Census indicator on self-reported health to generate a field that relates to the proportion of residents in an output area that are in bad or very bad health. Figure 7 illustrates that those individuals living in output areas that are classified as most deprived according to our measure have a higher likelihood of reporting poor self-reported health outcomes.

Figure 7: The relationship between self-reported health and our measure of deprivation across the UK 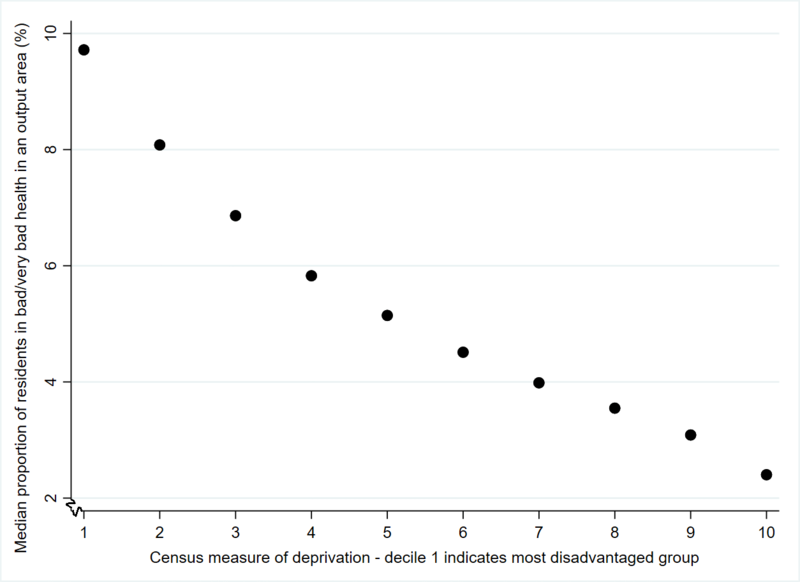 Next: Section 5: Should housing tenure form part of a composite measure based on the Census?