Looking beyond access: How do graduate perceptions of their work vary by socioeconomic disadvantage?

24 March 2022
Data on this page has been revised and updated.
Expand this box for more information.

Research into equal opportunity in higher education has tended to focus on access. In this insight, HESA researchers explore the relationship between socioeconomic disadvantage and graduate outcomes.

To date (including in our publication earlier this month[1]), analysis relating to our measure of disadvantage[2] has concentrated on matters relating to access to higher education. In this piece, we switch our attention for the first time to outcomes. Specifically, we explore whether graduate views on the design and nature of their employment differ based on the socioeconomic background of the individual. Furthermore, we go on to suggest possible explanations for the findings we observe by looking at the interplay between these two factors and Standard Occupational Classification (SOC) 2020.

We hope that this study can advance knowledge in this field and support policymakers in each of the four nations, as well as staff within providers who assist those from less privileged backgrounds throughout their journey on a degree course.

2. Why does this matter?

Promoting equal opportunity for all is a key policy aspiration across the whole of the UK. For example, in England, this was highlighted in the Queen’s Speech in 2021, which noted that the ‘levelling-up’ agenda will involve widening opportunity within society.[3] In Scotland, the 2016 Fair Work Framework states that fair work should be available to all.[4] The Well-being of Future Generations (Wales) Act 2015 outlines one of the goals to be the establishment of a more equal country, where all have access to decent work.[5] In Northern Ireland, an aspiration of the restored executive, as detailed in a ‘New decade, new approach’, is the creation of an economy with opportunities for all.[6]

In line with national priorities, a shared objective across the UK higher education sector is to ensure that there is equal opportunity for all, with each nation noting the need to support those from deprived backgrounds. In November 2021, Michelle Donelan (the Higher and Further Education Minister) announced that providers in England would be asked to revise their Access and Participation Plans, with greater focus expected to be placed on the destinations of disadvantaged students following graduation. In her speech at a Times Higher Education Campus Live event, she stated that ‘a student’s outcome after university needs to be as important to providers as a student’s grades before university’.[7] In Scotland, Recommendation 33 of the ‘Blueprint for Fairness’ report by the Commission on Widening Access states that the Commissioner for Fair Access should ‘consider what further work is required to support equal outcomes after study for those from disadvantaged backgrounds’.[8] The Tertiary Education and Research (Wales) Bill anticipates one of the roles for the newly formed Commission in Wales will be to support disadvantaged students into employment after they complete their studies.[9] The Department for Economy in Northern Ireland has highlighted that ‘higher education and the opportunities that it brings should be available to all, regardless of their background’.[10]

Our sample consists of UK domiciled full-time first degree qualifiers from the 2017/18 and 2018/19 academic years. We additionally restrict the dataset to graduates who reported that their main activity after graduation was paid work for an employer in the UK and who responded to all three graduate voice questions. The final sample comprised of 169,690 individuals and is the same as that utilised in our previous insight on the association between SOC 2020 and the design/nature of work measure.[11] We split our UK-wide measure of disadvantage into deciles[2], with decile 1 representing the 10% of output areas in the UK with the highest average proportion of residents with below level 4 qualifications/in occupations that fell within NSSEC groups 3 to 8. Consequently, decile 1 represents the most disadvantaged group, with decile 10 consisting of those individuals from areas experiencing the lowest levels of deprivation.

The first thing we note from the figures in the main part of the briefing, as well as the additional tables supplied in the appendices, is that the relationship between socioeconomic disadvantage and the design/nature of work measure varies across the four nations.

In England, we generally observe that those from more deprived backgrounds report lower design/nature of work scores. As mentioned in our previous insight, overlapping confidence intervals will not necessarily mean that the differences between two groups are not statistically significant. When examining whether the scores between decile 1 and another decile were significant through formal hypothesis testing, we found this to be the case at the 5 percent level in all instances, aside from when we compared decile 1 with decile 2 or 3. Further exploration of the individual components that constitute the composite measure illustrates that this differential in England is predominantly driven by the disparity in responses by socioeconomic disadvantage for the extent to which ‘work fits with future plans’. Indeed, no clear pattern emerges for the ‘skills used in study’ or ‘work is meaningful’ variable.

Figure 1: Mean design and nature of work score by decile of measure of disadvantage (England) 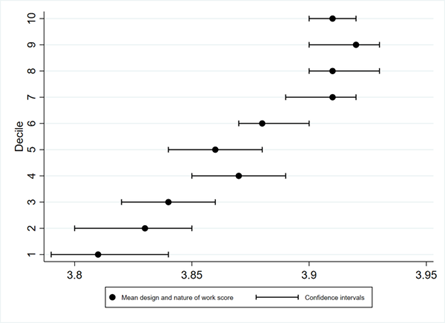 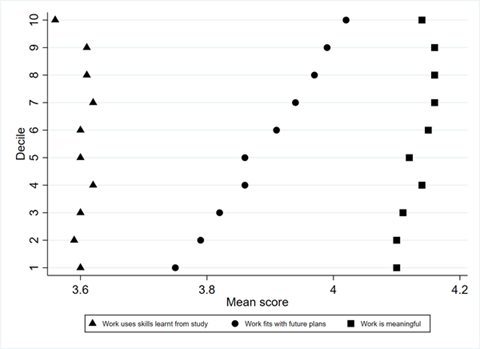 Figure 3: Mean design and nature of work score by decile of measure of disadvantage (Wales) 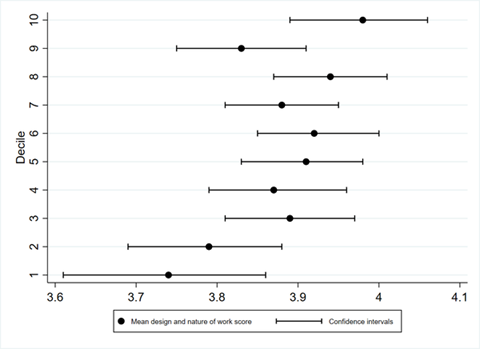 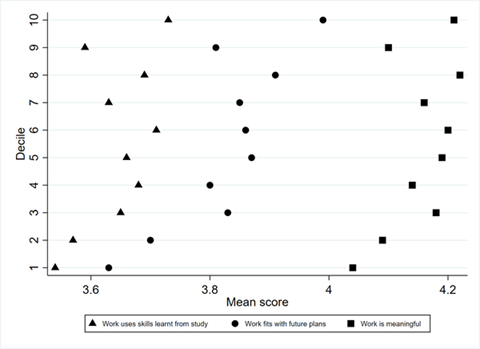 Figure 5: Mean design and nature of work score by decile of measure of disadvantage (Scotland) 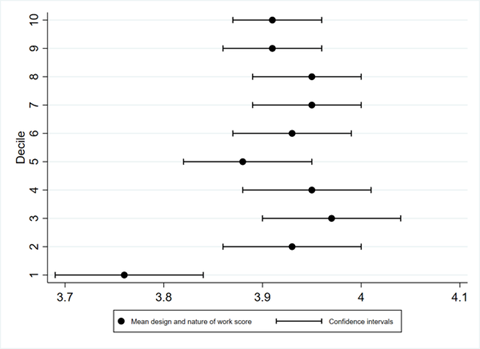 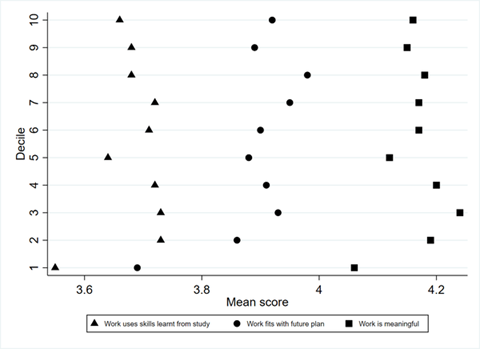 For Northern Ireland, no significant differences are found at the 5 percent level when assessing the relationship between the design/nature of work measure and socioeconomic disadvantage, though the sample sizes available to us are smaller in this part of the UK.[12]

Figure 7: Mean design and nature of work score by decile of measure of disadvantage (Northern Ireland) 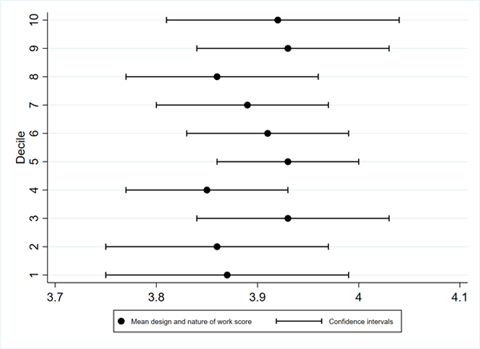 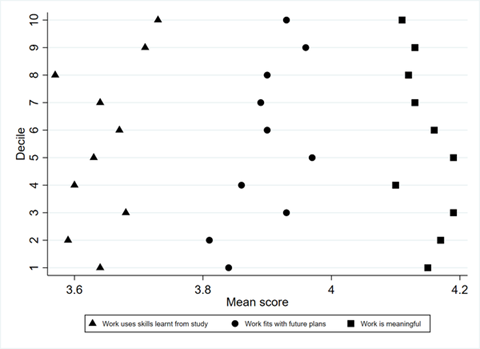 4.2. What may explain these findings?

In the case of the ‘work is meaningful’ variable, the lack of any obvious relationship with socioeconomic disadvantage is partially explained by the fact that we find a higher proportion of disadvantaged students are based within the caring, leisure and other service category, where the scores for ‘work is meaningful’ are higher than almost all other occupations.

Over coming months, we shall continue to draw upon the responses we received to our consultation on the design/nature of work measure to explore how various factors relate to the design/nature of work measure. Future insights relating to this measure will therefore be published in due course. In the meantime, comments on this (or our previous) releases are most welcome and can be sent to [email protected].

[11] We exclude those domiciled/employed in Guernsey, Jersey or the Isle of Man or those for whom we cannot assign a specific region of domicile/employment in the UK. As the purpose of this insight is to advance knowledge on this issue within the sector, we limit the dataset to those providers that agreed for the data they had submitted to be used for such purposes. More detail on this can be found at https://www.hesa.ac.uk/support/provider-info/subscription/onward-use.

[12] Formal hypothesis testing involves conducting the t-test for differences in means between two independent samples. Please note that the findings around statistical significance discussed in this section apply whether one assumes equal or unequal population variances. Confidence intervals reported in the appendices are based on the t-distribution.