Getting a move on: The creation of a new graduate mobility marker

In this insight, HESA researchers introduce a new geographical mobility marker and explore the added value it could bring when examining graduate trajectories/outcomes.

Why do we need a new variable on graduate mobility?

In recent years, policymakers across all nations of the UK have recognised the need to address spatial inequalities, with outcomes known to vary both by and within the regions of the country.[1] As we noted in our report last year outlining a new UK-wide measure of disadvantage, higher education is acknowledged to have an important part to play in tackling these imbalances (e.g. by helping to raise local productivity levels through the training and education opportunities it offers to those living within the area in which the provider is based).[2] Indeed, a 2019 report by the UPP Foundation Civic University Commission highlighted public interest in seeing universities localise their duties and missions.[3] These ambitions have raised the demand for data that helps with understanding the extent to which individuals move from their original place of residence for study and/or work. For instance, more equitable growth may be harder to achieve if particular parts of the country continuously experience a ‘brain drain’ – a term often used to describe the movement of highly skilled workers out of a specific locality.

Despite the direction of policy, most analysis relating to graduate mobility is currently at the regional level. The few studies that are based on a more granular level of geography have their own limitations, such as not being UK-wide[4] or focusing solely on cities.[5] Furthermore, users of our data have supplied feedback to us that they would value more detailed geographic information on graduate movements.

From a data perspective, carrying out a mobility analysis at regional level does also introduce a risk of pooling together graduates with quite different trajectories/outcomes. For example, in a regional exploration, a ‘returner’ would be classified as a graduate who leaves their region of domicile for study, though comes back for work.[6] However, some of these graduates may have returned to work in a completely different part of their home region to the one they lived in before starting higher education. Moreover, their outcomes could vary from those who do return to work in the same local area.

The Code of Practice for Statistics states that ‘the views received from users, potential users and other stakeholders should be addressed, where practicable. Statistics producers should consider whether to produce new statistics to meet identified information gaps’. In line with this objective and to improve the level of insight we can offer our users, we have created a new graduate mobility marker. In what follows, we outline how this was derived, as well as the potential usefulness of this variable to those with an interest in mobility and its correlation with outcomes. By doing so, we address many of the next steps we outlined in our previous research on this matter.[7]

A more local focus – how we derived our new marker

Postcode prior to entering higher education is one of the fields HESA collects as part of our Student record. Using the Office for National Statistics (ONS) postcode directory, we can map this to higher level geographies, including local/unitary authority (and the closest equivalents in Scotland/Northern Ireland).[8] Additionally, as part of the Graduate Outcomes survey, we ask respondents to supply the postcode for their place of work. Alternatively, if this is not known, individuals are requested to provide the name of the town, city or area. This information can be used to determine the local/unitary authority of the graduate’s employment location. Using region of provider to understand place of study[9], alongside the two fields on domicile/work at local/unitary authority level (LAUA), we initially generate a marker with fifteen categories as outlined in the appendix (excluding those who we cannot classify for reasons such as not having any data from them on their location of work).[10]

We focus on UK-domiciled graduates who completed their higher education course in 2017/18 or 2018/19 and who noted their most important activity to be paid work for an employer.[11] Given our interest in analysing the association between fair work and mobility, we further restrict our dataset to those who responded to all three ‘graduate voice’ questions and could be allocated to one of the fifteen mobility groups, leaving a total of 279,700 individuals in our sample.[12] As we found that some of the categories in our derived mobility field contained a very small proportion of individuals, we explored the possibility to combine some of these together. Subsequently, we created the following (more aggregated) classification outlined beneath, with the appendix detailing how this was formed. Users should note that we cannot identify where a graduate is living fifteen months after completing their course through the survey and that some graduates may not be residing in the same location as their place of employment.

Previous findings relating to graduate mobility have noted that 45% of graduates (i.e. those in categories A and C) reside (prior to beginning their course), study and work in the same region.[13] While a similar percentage emerges in our analysis, we can see that 60% of these graduates find work in a different LAUA to their initial location (pot C). However, there are differences by region of domicile, with areas like Wales as well as Yorkshire and The Humber seeing more of their ‘loyals’ being employed in the same LAUA as they originally lived in.[14] Furthermore, though ‘returners' (pots B and D) comprise 22% of our sample, we see 63% secure work in a different LAUA to the one they lived in before commencing their studies (pot D), though there are once again disparities by region of domicile.[15] As discussed earlier in this insight, pooling ‘returners’ (or indeed those who were based in the same region as their initial residence for study and work) into the same pot could be concealing variations in the extent of mobility between graduates. Our new marker indicates this to be the case. 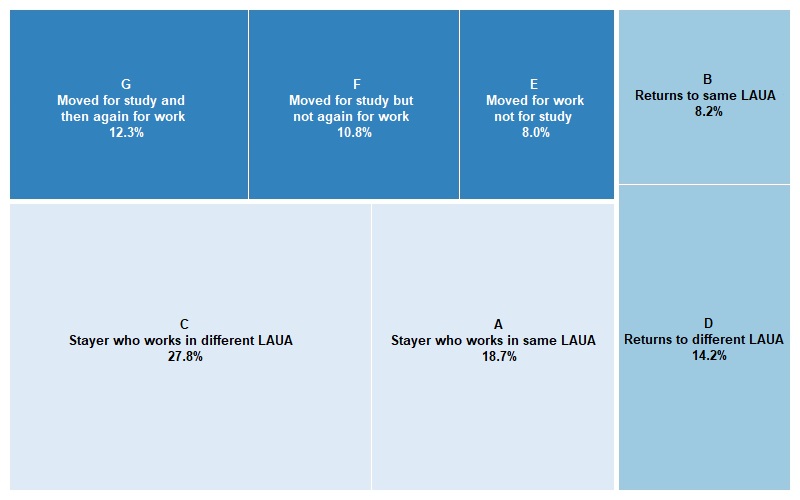 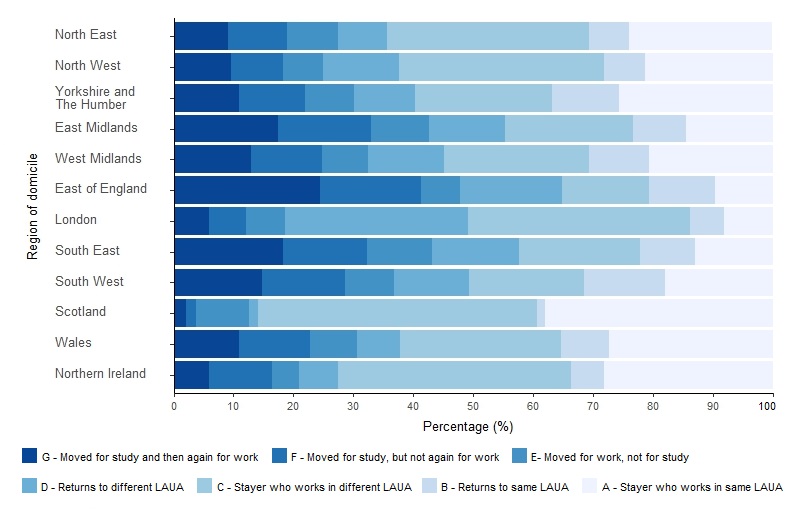 The association between graduate mobility and the design/nature of work measure we have created was identified as an area of interest by our users during the consultation we ran last year. The development of this new marker not only offers an opportunity to look into this, but can help to further illustrate the value our mobility field may have for those wishing to explore how graduate movements correlate with their outcomes. Existing literature has noted that ‘returners’ tend to fare worst in the labour market after graduation and we can see that both groups B and D report the lowest design/nature of work scores. Yet, there is a clear difference based on whether or not the returning graduate works in a different LAUA to the one they initially lived in. Moving back to work in the same LAUA that you resided in is correlated with a lower design/nature of work score. In a similar vein, among those graduates who originally lived, studied and now work in the same region (pots A and C), higher scores are observed for individuals who are employed in a different LAUA (pot C). Looking at the individual components that form this measure, we see that these differences are particularly driven by the extent to which the job fits with future plans (see Table 3 in Appendix 2). These variations would have been masked in previous definitions of graduate mobility, which did not take into consideration information at the LAUA level. Focusing on those who leave their region of domicile and do not return (i.e. pots E, F and G), it appears that moving region/country for work (e.g. groups E and G) has a greater association with this dimension of employment quality than only moving for study (group F). 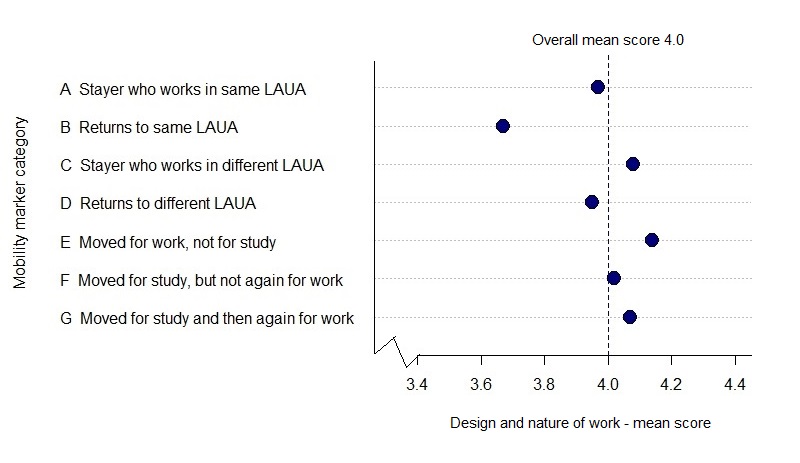 Much of the discussion in this insight has focused on the benefits of the greater disaggregation our marker can offer to those who wish to either explore or understand more about graduate mobility through helping to uncover insights that would otherwise have remained hidden.

As noted in the introduction, there is also significant policy interest in matters such as the ‘brain drain’ from areas. The tables (in Appendix 2) and charts we have presented do supply some insight into this. We see that 9% of Scottish-domiciled graduates leave the country for work after studying in Scotland (pot E), though very few Scottish students choose to leave the country to pursue higher education in another part of the UK. 21% of Northern Irish graduates leave (without returning) for study and/or work (pots E, F or G), with most of this accounted for by individuals initially leaving the country for study and then not coming back to the country for work (pots F and G). 31% of Welsh graduates are in pots E, F or G. Approximately three-quarters of Welsh graduates who have left Wales originally did so for study, before also finding work outside of the country (pots F and G). In England, almost one-quarter of graduates from the East of England are found to be in group G (the highest proportion across any region), though just under 50% move to study in a neighbouring region (i.e. East Midlands, London or the South East) before most commonly obtaining employment in London.

However, we recognise that users will be interested in such statistics at an even more local level. Over the coming years therefore, we shall be examining the feasibility of conducting analysis into topics such as the ‘brain drain’ at the LAUA domain, which will require us to assess such issues as the sample size we have available at this level of geography.

[6] Please note that references to domicile indicate the area in which the student’s permanent home address was located prior to starting their higher education course. Work on graduate migration and associated terminology was first introduced by Charlie Ball in 2005. More information can be found at https://luminate.prospects.ac.uk/who-stays-and-who-goes-graduate-retention-under-the-microscope

[8] These are Council Areas in Scotland and Local Government Districts in Northern Ireland.

[9] Those who attended The Open University have been assigned their region of study based on their campus information and therefore allocated to one of: South East England; Wales; Scotland or Northern Ireland. As Open University graduates only make up around 1.5% of our sample, their inclusion/exclusion does not materially change the distribution of individuals across the seven-category mobility marker we have created.

[10] Graduates were allocated to a category falling between 4 and 15 in instances where individuals stated on area, town or city that could not be allocated to a local/unitary authority, but could be mapped to a region. This was most notably an issue in London, but does not change the finding discussed in footnote 15.

[11] As with previous insights, since this is not a statutory statistical release designated under the Higher Education and Research Act 2017 in England, the data set we use includes those HE providers that agreed for data they had submitted to be used for research purposes (see Categories of Onward Use of Data (category 1) for further details).

[12] Please note that there is no material change in what we find if we carry out an analysis by year of graduation.

[14] Previous research has described ‘loyals’ as graduates who live, study and work in the same region.

[15] London is an outlier with ‘loyals’ and ‘returners’ far less likely to be working in the same LAUA as they originally resided in. Excluding London from the analysis results in the proportion of ‘returners’ who secure work in a different LAUA to the one they initially lived in falling from 63% to 57%. Among those who lived (prior to starting their course), studied and work in the same region, the proportion of graduates who are employed in a different LAUA to their initial location drops from 60% to 56%.