The graph below shows the trends in HE qualifications awarded. The fall in first degrees awarded in 2014/15 reflects the dip in new entrants in 2012/13 when the £9,000 tuition fee cap was introduced in England. This dip followed a peak in entrant numbers in 2011/12 before the new fee cap was introduced. The overall number of 395,580 first degrees has grown by a quarter (25%) in the ten years from 2005/06. 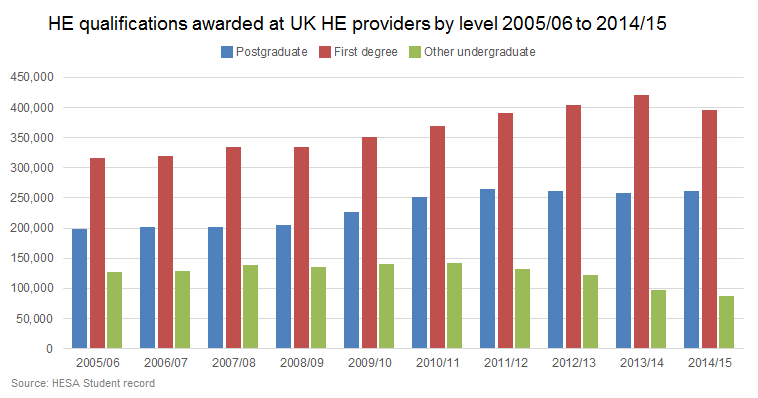 Background data can be found in our free online tables.

The chart below represents the numbers and proportion of qualifiers by sex and domicile. In 2014/15 57% of postgraduate and first degree qualifiers, and 58% of other undergraduate qualifiers were women.

Background data can be found in our free online tables.

Selected tables from today's publication, including more detailed data on qualifications awarded in 2014/15 and earlier years, can be found in our free online data pages. Further tables and graphs can be found via the publication's introduction.

The next scheduled release from HESA will be the publication of Staff in Higher Education 2014/15 on 25 February. A schedule of our releases for 2016 can be found here.

HESA is the recognised source of data on higher education in the UK. Our experts collect, analyse, and disseminate accurate and comprehensive statistical information on all aspects of UK higher education in order to support the strategic aims of our users and enhance the effectiveness of the sector as a whole. We are a charity and a company limited by guarantee. We operate as an independent organisation, working in close partnership with higher education providers, regulators, funders, government departments, policy makers, and other stakeholders.