Indicators for Widening Participation and Non-continuation are published today on our website.

The full tables show the indicators for every publicly funded HE provider in the UK alongside their benchmark.

Table T1a shows the percentage of young entrants in 2013/14 from state schools, lower socio-economic classifications (SEC) and low participation neighbourhoods by HE provider.

Table T3a shows the percentage of 2012/13 entrants not continuing into second year by HE provider.

Table T5 shows the projected outcomes for 2012/13 entrants by HE provider.

Summary tables showing statistics for the whole UK can be found here.

The latest statistics show that of all UK domiciled, young, full-time, first degree entrants in 2013/14:

The graph below shows the proportion of UK domiciled, young, full-time, first degree entrants from state schools for the years 1998/99 to 2013/14 (see Note 6 below): 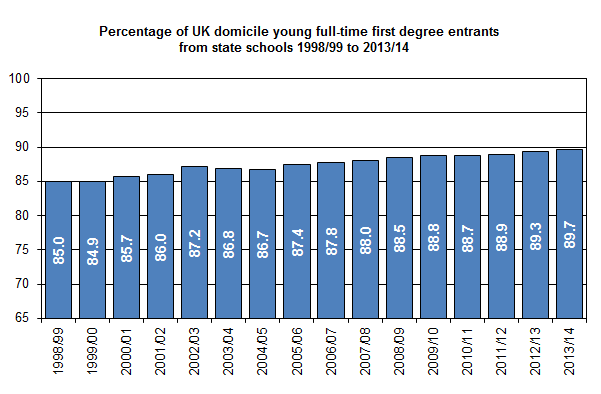 More Widening Participation summary tables and charts can be found here. The full HE provider level tables are available here. 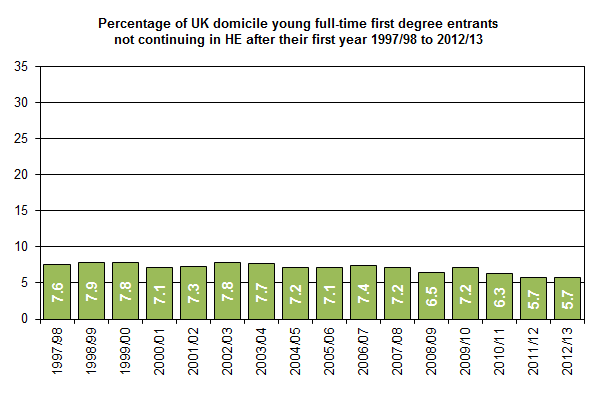 More Non-continuation summary tables and charts can be found here. The full HE provider level tables are available here.