The publication, released on 23 July 2015, provides extensive coverage of the 2013/14 DLHE survey. The online introduction includes a variety of graphs and tables displaying the survey results.

73% of 2013/14 UK domicile full-time first degree graduates said that working was their most important activity, up from 70% of 2011/12 leavers. Of those working, 69% were in professional occupations, compared to 65% two years ago.

16% gave further study as their main activity, of whom 85% were involved on a postgraduate course (as opposed to seeking a professional qualification or no qualification).

5% of survey respondents did not fit into any of the above categories. The majority of these leavers were taking time out to travel. 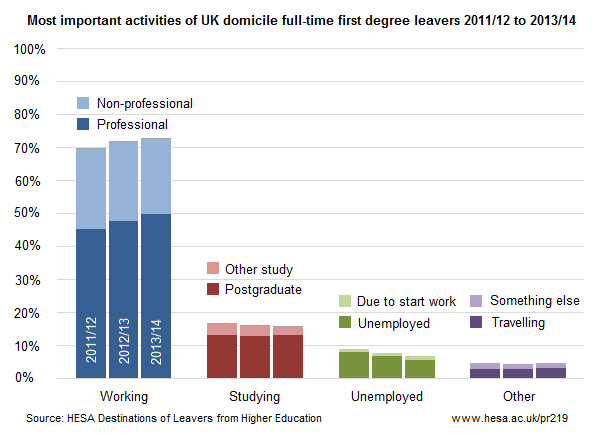 Of those in jobs, 59% on permanent contracts

The survey also asked graduates about the basis of their employment. Of those UK domicile, full-time, first degree leavers whose most important activity was working, 59% were employed on a permanent or open-ended contract, 5% were self-employed or freelance, and 1% were starting their own business. 3% of working graduates were on an internship or placement. 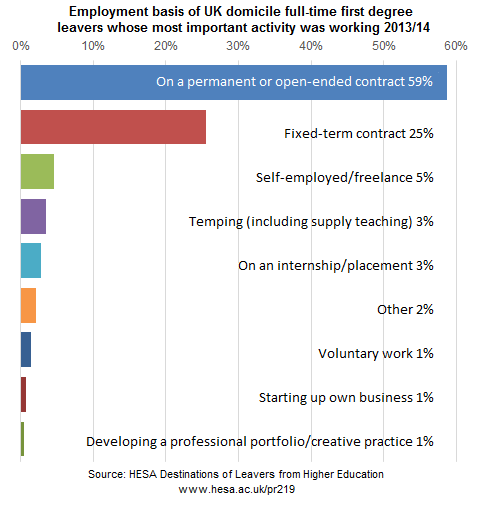 Destinations of Leavers from Higher Education 2013/14 provides detailed information on the activities of students 6 months after leaving higher education. The 51 tables in the publication (see contents list) include activity and employment breakdowns by:

Destinations of Leavers from Higher Education 2013/14 is available to purchase now from our site.

The free online introduction to the publication includes sector level tables and charts covering various aspects of the survey results.