This commentary draws attention to some of the headline figures and key points that emerge from the main tables. The information is displayed graphically where appropriate. It should be noted that where comparisons are made between the latest financial year and a previous year, the figures for the previous year are as re-stated in the most recent financial statements available; any exceptions are noted explicitly. They are not therefore necessarily reconcilable with figures for that year published in previous HESA volumes. However, it is understood that all such figures can be reconciled to the published accounts of the institutions. It should be noted in all tables, The Open University is counted as an institution based in England, although its funding now includes contributions from other administrations. The tables include finance data for The University of Buckingham, which is a non-publicly-funded institution in England and operates on a different financial year from the 1 August to 31 July financial year standard for the rest of the sector.

A comparison of the HE sector’s balance sheet at 31 July 2010 with that at 31 July 2009 (both as stated in the 2009/10 accounts in Table A) shows a £576 million increase in amounts falling due within one year while amounts due after more than one year have increased by £308 million. There was an increase of £102 million in debtors.

To provide the context for these figures, Chart 1 (sourced from Table A) shows the HE sector’s surplus/deficit (re-based and re-calculated as appropriate) for each of the last 10 years. These are cash figures to which no deflator has been applied. Data were returned to HESA for the financial year 1993/94 onwards; figures for these financial years are set out in earlier editions of this publication. 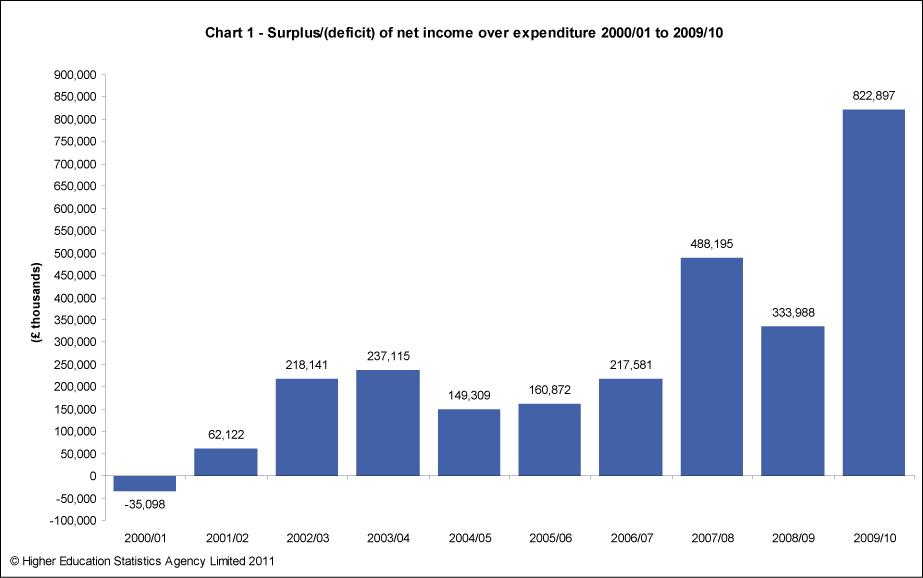 Table C aggregates income and expenditure figures for institutions funded by each of the four UK countries’ funding councils. All four countries reported a surplus for the year 2009/10 and all showed an increase as a percentage of their net income on the previous years. Chart 2 below illustrates change in surplus as a percentage of net income over the last three years (sourced from Table C). 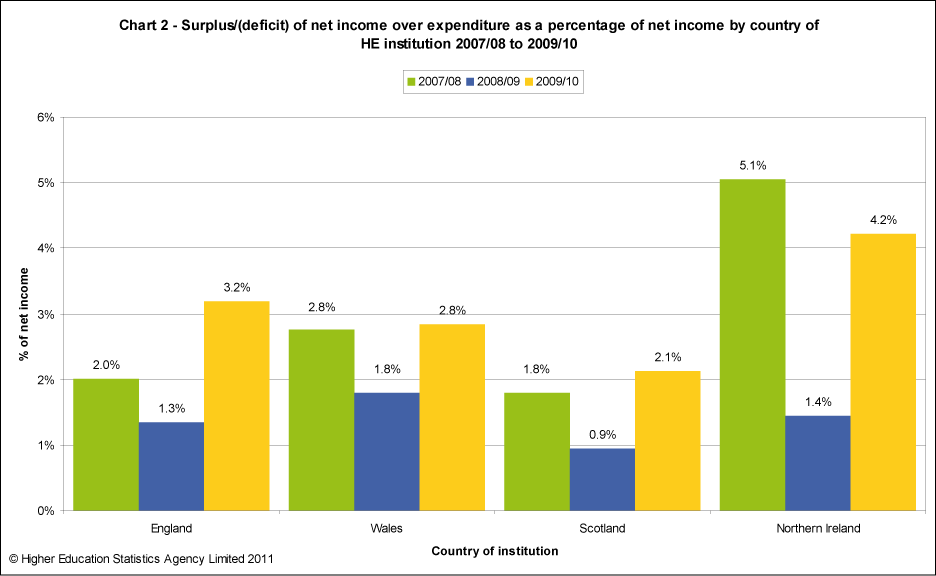 Charts 3 and 4 below summarise institutions’ sources of income in terms of proportions contributed by and the growth or otherwise of each source over time (sourced from Table D). 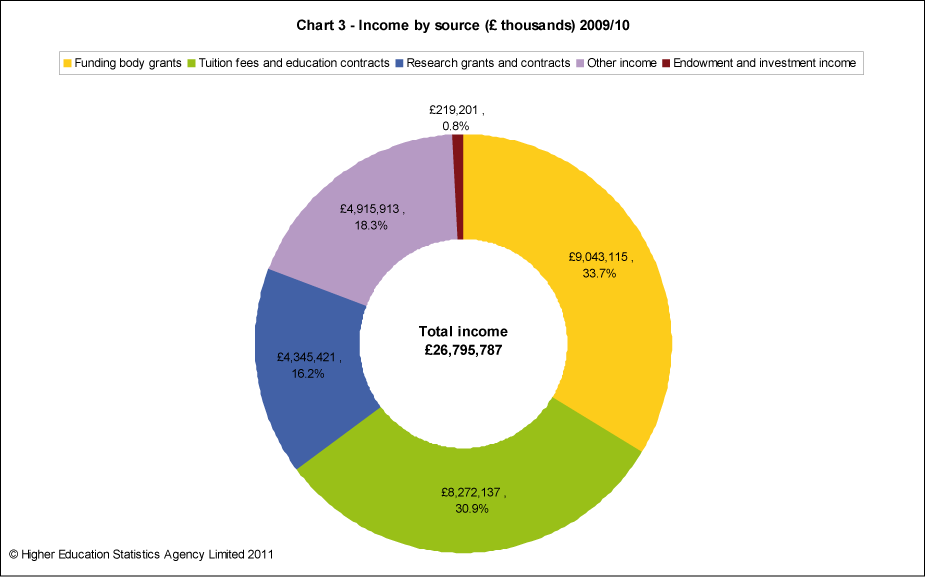 Funding body grants represent a 33.7% proportion of total income. Tuition fees & education contracts represent a 30.9% proportion of total income. Total income increased by 5.6% from 2008/09 to 2009/10 and there was an increase across all sources except for income from endowment and investment which decreased by 39.0%. The largest increases were observed in income from tuition fee and education contracts (13.4%) and research grants and contracts (4.7%). 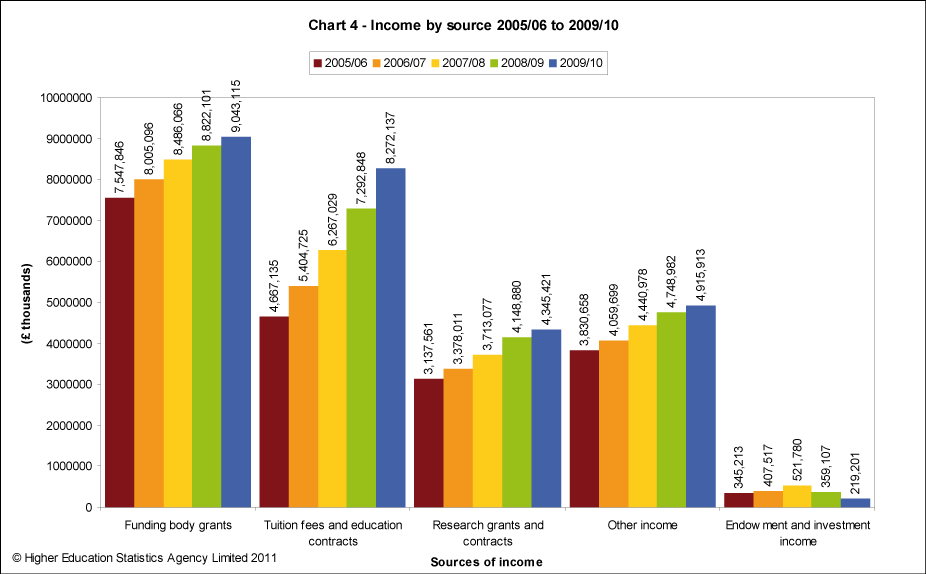 The breakdown in Table D of income by source also shows the component of income arising from joint ventures, and the net income after removing this component.

Institutional funds for academic and other purposes are allocated primarily by the Higher Education Funding Council for England (HEFCE), the Higher Education Funding Council for Wales (HEFCW), the Scottish Funding Council (SFC) and by the Department for Employment and Learning for Northern Ireland (DEL(NI)) acting as a funding agency for the four Northern Ireland higher education institutions. Some funds are also provided in England by the Department of Health (DH) and the Training and Development Agency for Schools (TDA). Table E provides a breakdown of funding body grants.

Table F provides a breakdown of income from tuition fees and education contracts by country of institution. The total income for tuition fees and education contracts increased by 13.4% this year to £8.3 billion from £7.3 billion in 2008/09. The breakdown in Table F differs from that in years prior to 2006/07 because the previous breakdown is no longer compatible with the different fee systems in each of England, Wales, Scotland and Northern Ireland. Income from full-time Home/EU domiciled undergraduate students provided 46.4% of the income in this category, and that from overseas (non-EU) students provided 31.2%. The total income from HE course fees varied by country as shown in Table F, as did the proportions by the type of fees as indicated in Chart 5 (sourced from Table F). 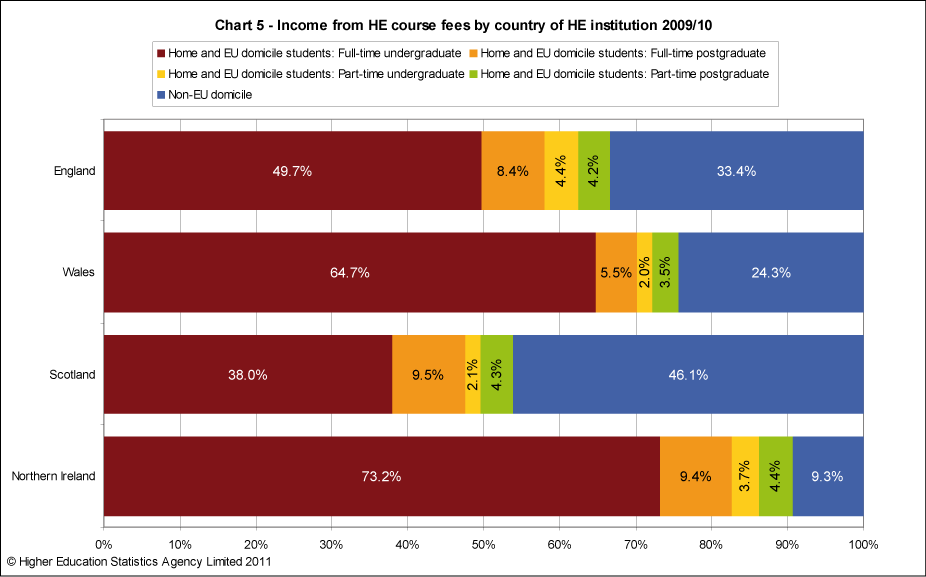 Income in this category increased by 3.5% this year to £4.9 billion from £4.7 billion in 2008/09. Nearly one third (30.3%) of other income came from residence and catering operations (including conferences). Table H provides a breakdown of all other income.

Overall expenditure rose by 3.7% (£917 million) to £25.9 billion as shown in Table I. The largest categories of expenditure; staff costs and other operating expenses increased by 3.3% and 3.1% respectively. Chart 6 below shows the distribution of expenditure (sourced from Table I). 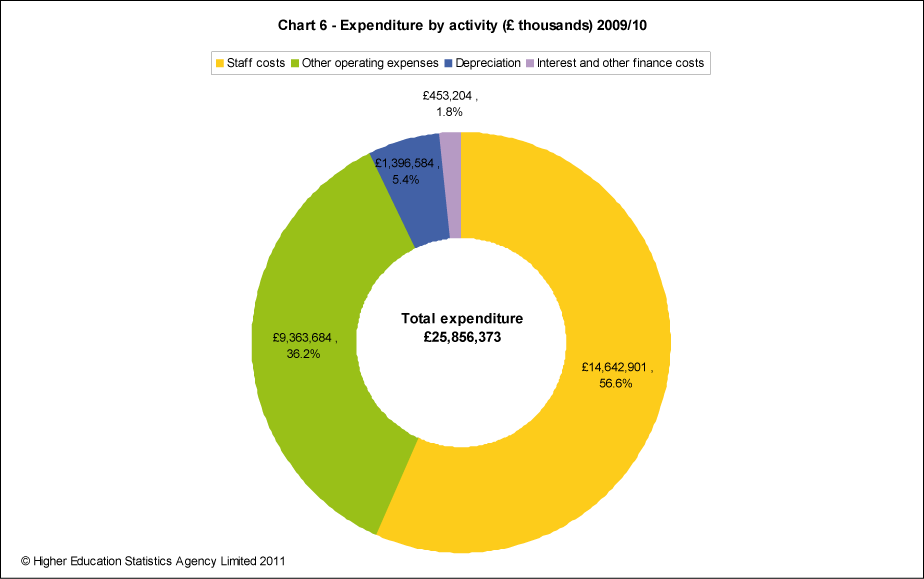 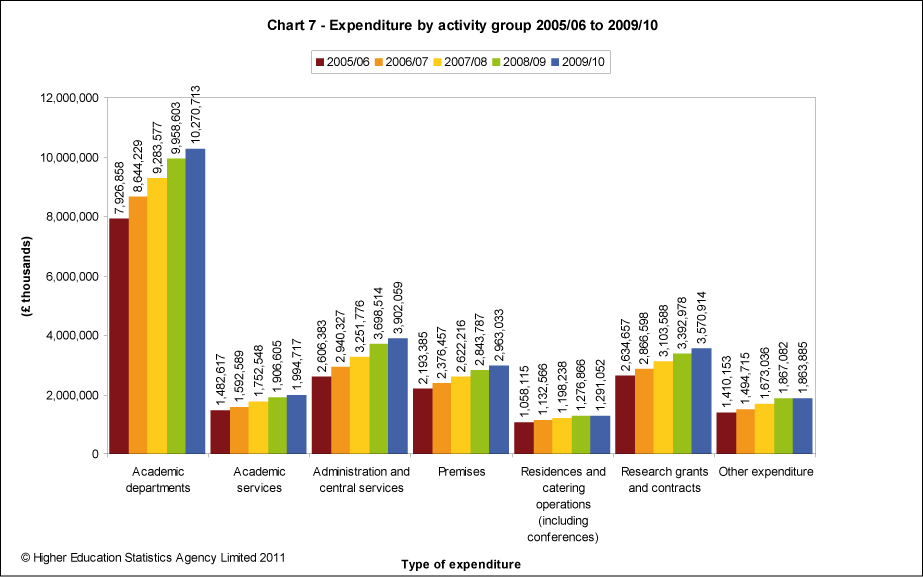 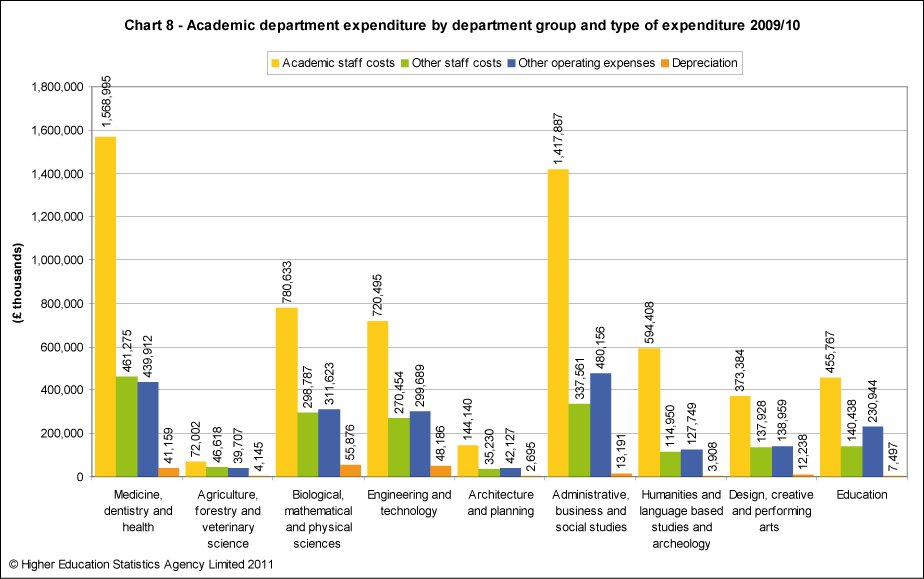