The HESA Staff Record covers all academic and non-academic staff who have a contract of employment with a higher education institution (HEI) in the UK, or for whom the HEI is liable to pay Class 1 National Insurance contributions. Other staff, such as those employed under consultancy contracts, or on the basis of payment of fees for services but without a contract of employment, are not included in the record.

The staff return covers data supplied by 166 HEIs (131 in England, 12 in Wales, 19 in Scotland, 4 in Northern Ireland); one of the English HEIs, The University of Buckingham, is a non-publicly-funded institution voluntarily providing data to HESA. The number of Welsh institutions in this publication is different from the number reported in some other HESA products because of the inclusion of staff data from The University of Wales (central functions).

All figures provided in the introduction tables and text are based on full-person equivalents (FPE; headcounts) rather than full-time equivalents (FTE; weighted by proportion relative to full-time). Where data has been disaggregated by contract characteristics, such as activity, the FPE figures have been apportioned across the contract(s) held by the staff member.

Table A shows the overall pattern of staffing in UK HEIs, including atypical staff. Chart 1 below illustrates the distribution of all full-time staff, excluding atypical, by activity (sourced from Table A). 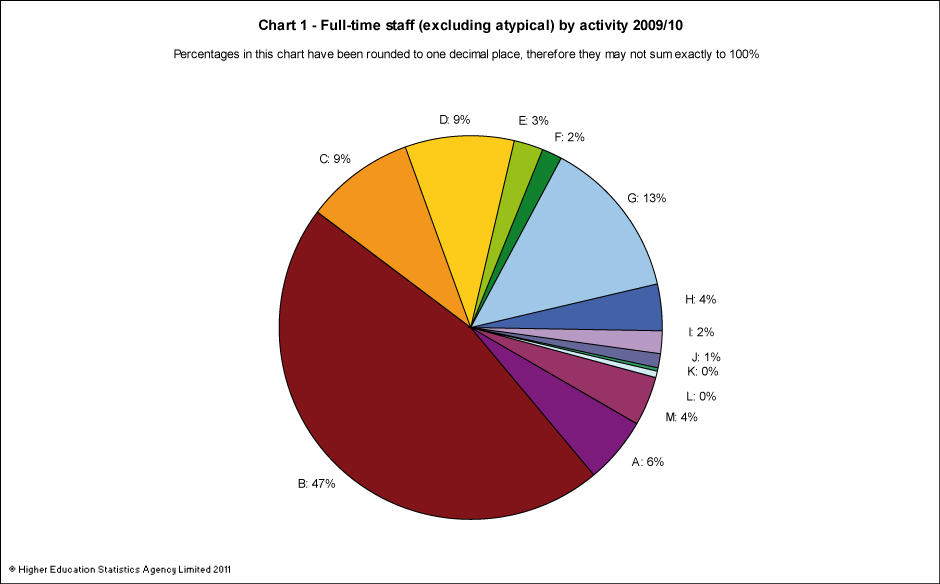 Chart 2 below provides the gender proportions by activity of full-time staff (sourced from Table A). 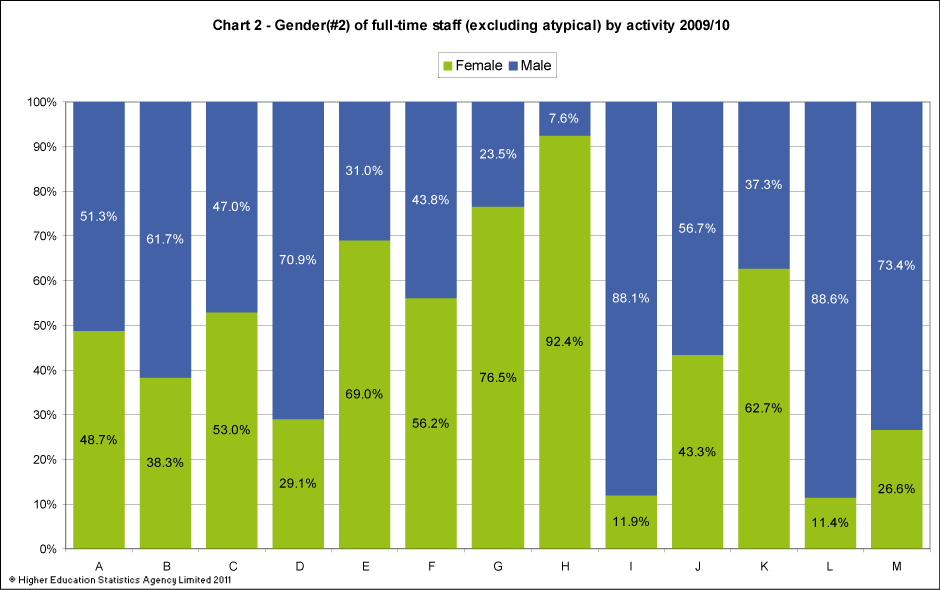 Chart 3 provides equivalent data to Chart 2, but for part-time staff (sourced from Table A). 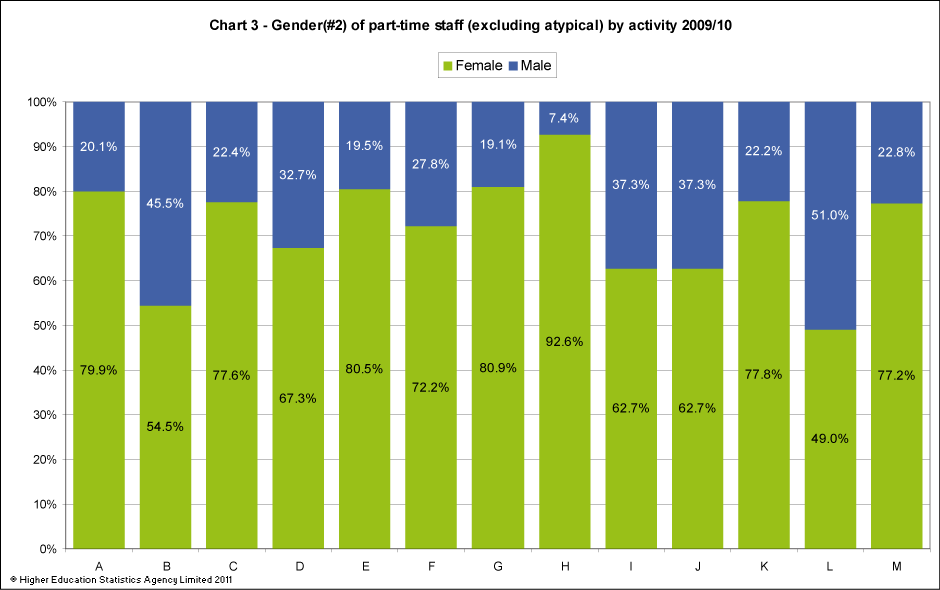 Table B and Table C respectively provide a breakdown of academic and non-academic staffing in HE. Atypicals have been excluded from these tables as the majority of the data is not collected for atypical staff.

Chart 4 below provides the proportions of full-time and part-time academic staff by academic employment function (sourced from Table B). 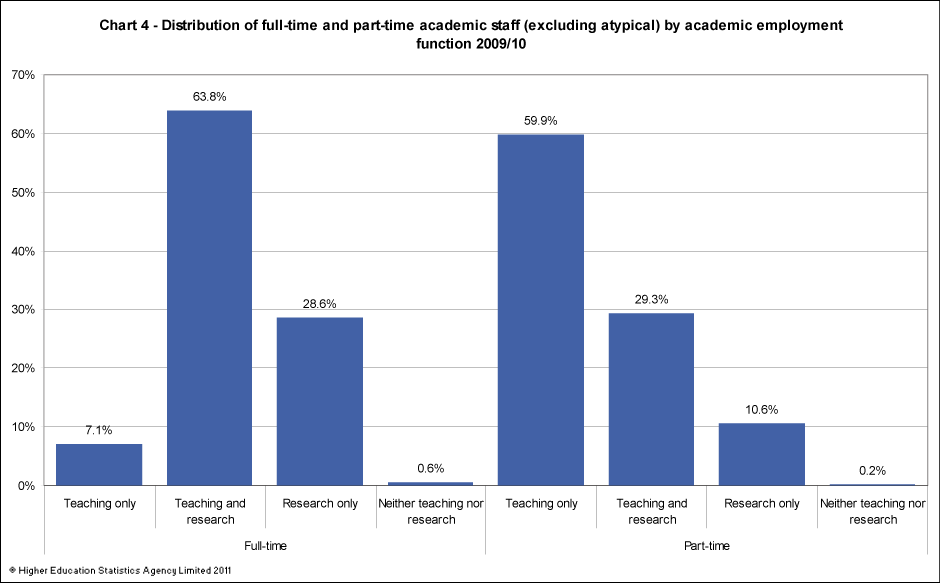 Among full-time academic staff, 41.1% had contract salaries between £41,323 and £55,535. For part-time academic staff, 42.7% had contract salaries between £30,747 and £41,323. It is worth clarifying here that salaries for part-time staff are not reported to HESA as pro-rata amounts but as salaries scaled up to full-time equivalent rates. Therefore the different modal points noted are likely to reflect material differences in the profiles of full and part-time staff. 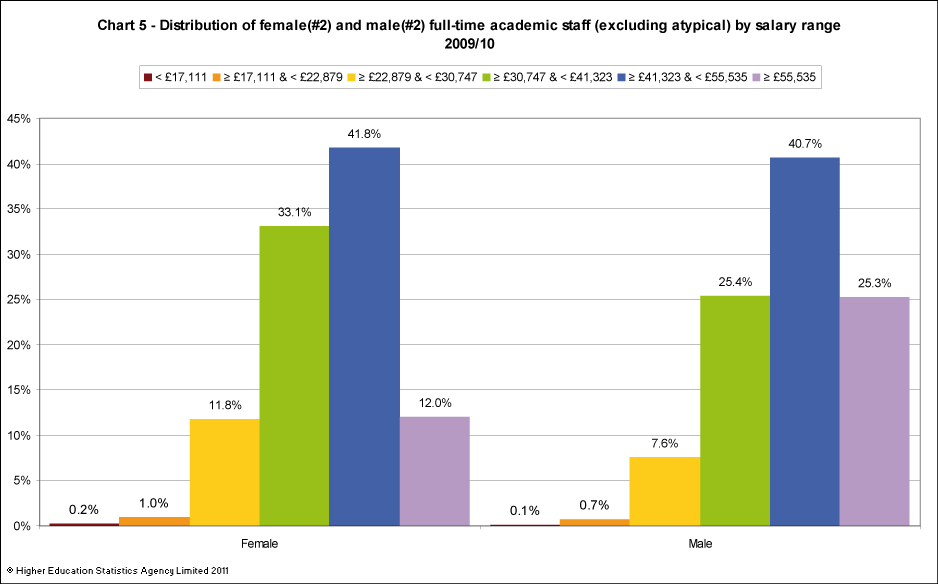 Chart 6 below provides the proportions of staff within each activity group by contract salary range (sourced from Table C). The salary ranges have been defined with reference to the nationally–agreed pay spine for non-clinical staff. 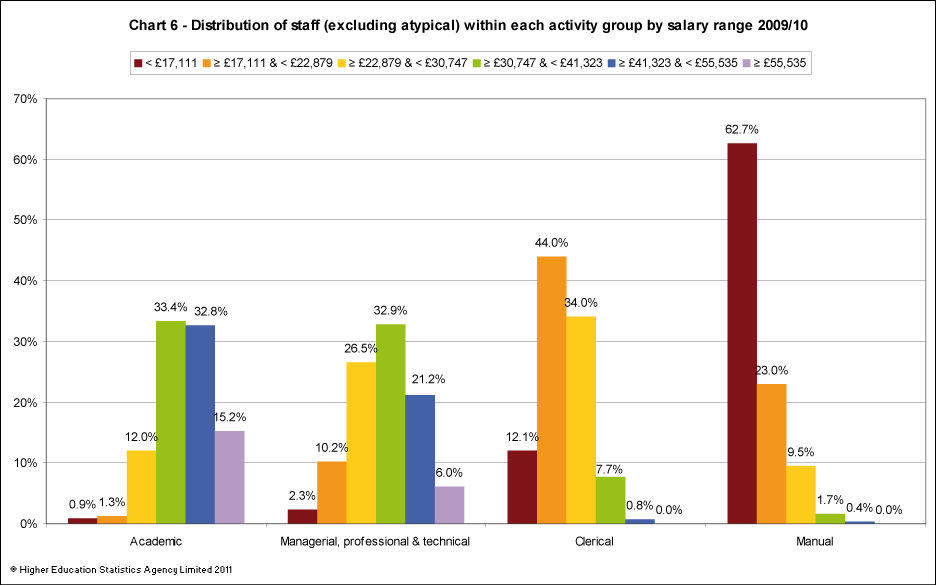 This results in academic staff numbers that are slightly different from those given in Tables B and C. Data given in table D also differs from that given in the main tables 20-22 which are based on staff contracts rather than headcount.

Data in table D is similar to that published in table M of the Resources of Higher Education Institutions 2008/09 volume but separates out those staff members who were on an atypical or non-academic contract in the previous year (inflows) or following year (outflows). 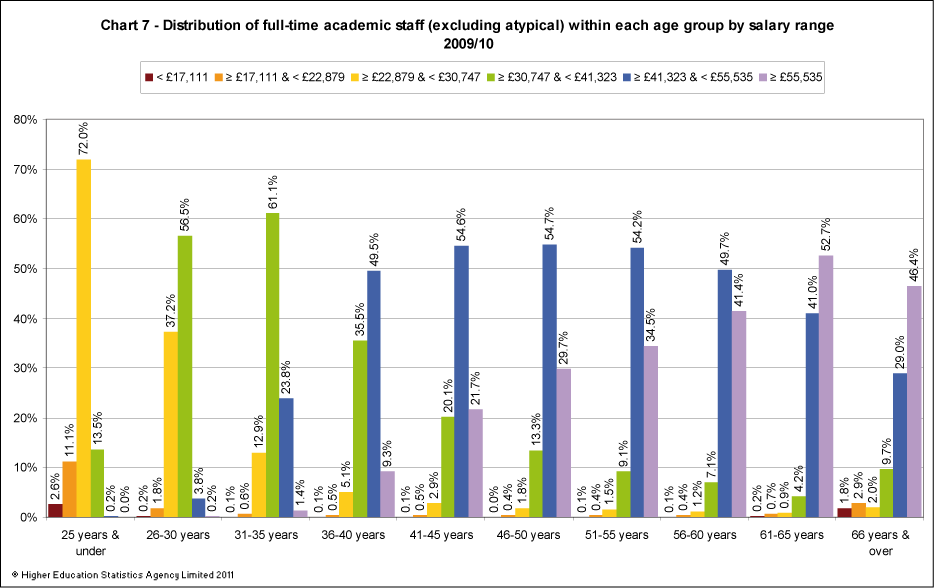 Ethnicity of all staff

In Table F ethnicity is shown broken down by the four broad-brush staff groups and by mode of employment. The presentation of ethnicity data in this introductory section refers to staff of all nationalities, and this should be borne in mind if comparisons are made with figures published for years prior to 2003/04, which were restricted to UK nationality.

Of all full-time and part-time staff, 92.1% reported their ethnicity. The response rate did not vary greatly by staff group and mode of employment. Among staff of known ethnicity, the proportion from ethnic minority groups varied considerably, with greater representation among academic staff at 12.0% than among non-academic staff at 9.8%.

Ethnicity was reported for only 66.5% of atypical staff. Of those atypical staff of known ethnicity, 18.2% were from ethnic minority groups. 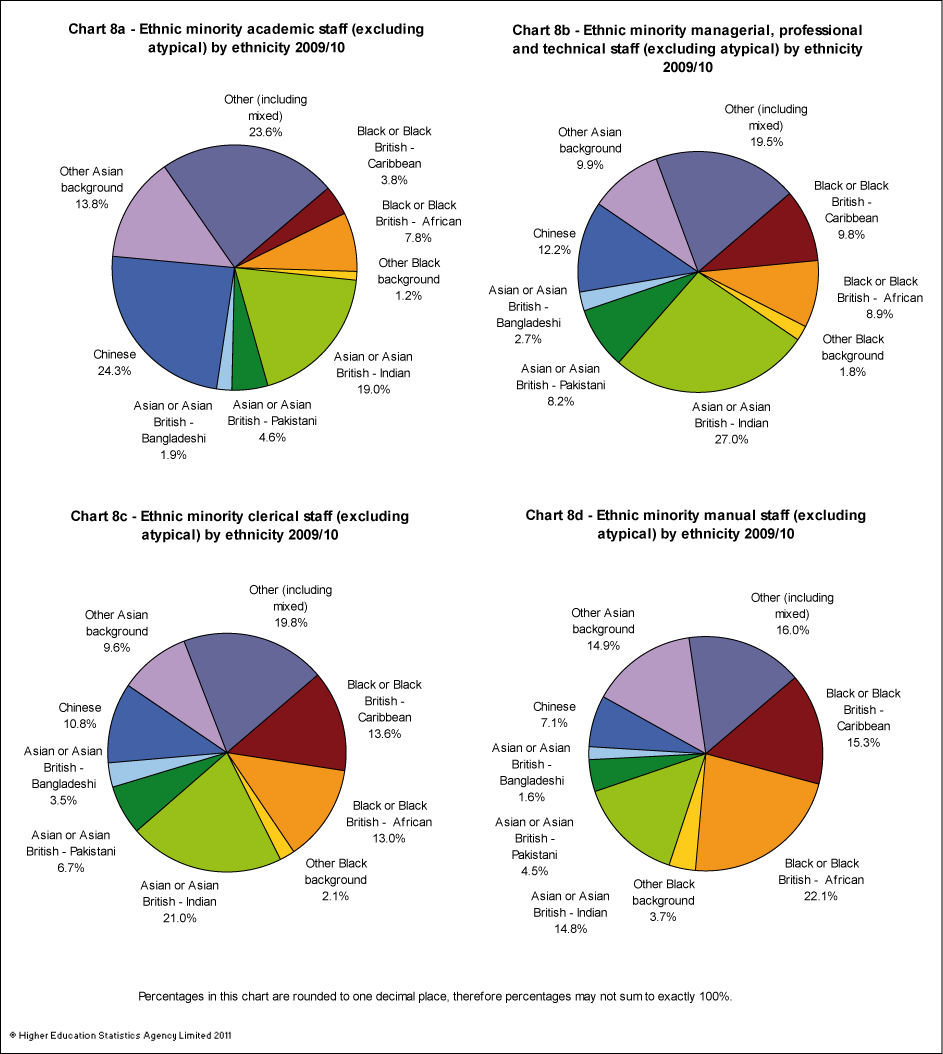 Disability of all staff

Table H presents information on disability by activity group and mode of employment for all staff, in a similar style to Table F.

Table I provides a disability breakdown, based on the staff members’ own assessment, of staff by activity group. The chart series 9 below illustrate the data from Table I in pie chart format. 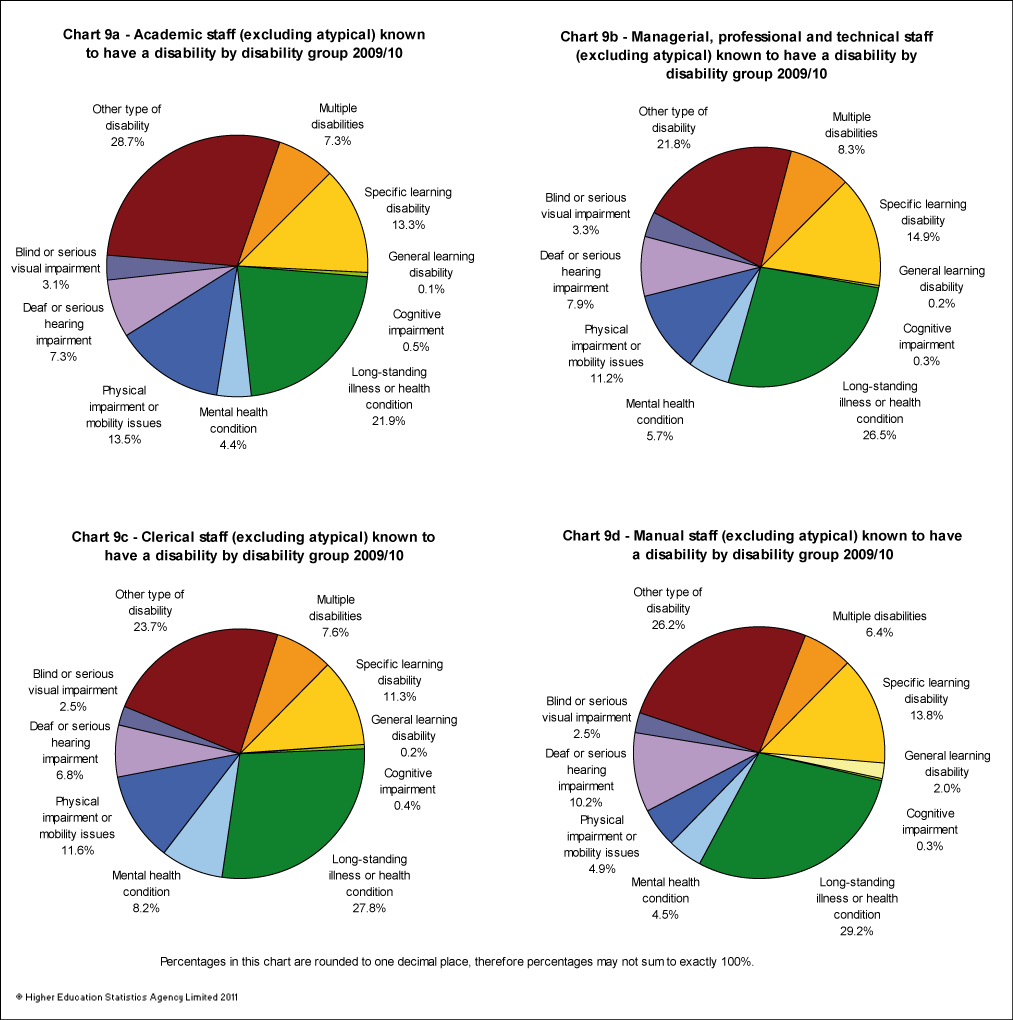 53.3% of full-time clinical staff were wholly institutionally financed compared with 73.1% of non-clinical academic staff. This reflects the greater prevalence of joint funding arrangements for clinical staff such as joint contracts involving the NHS.

The data in Table K provides a breakdown of full-time academic staff by cost centre group, source of basic salary and gender.

43.1% of full-time academic staff in medicine, dentistry & health and 45.4% in biological, mathematical & physical sciences were financed other than wholly by the institutions themselves. Cost centre groups with the fewest partially or wholly externally funded full-time academic staff were in the areas of design, creative and performing arts 4.0%, education 7.9%.

Chart 10 below provides the gender proportions by cost centre of full-time staff (sourced from Table K). 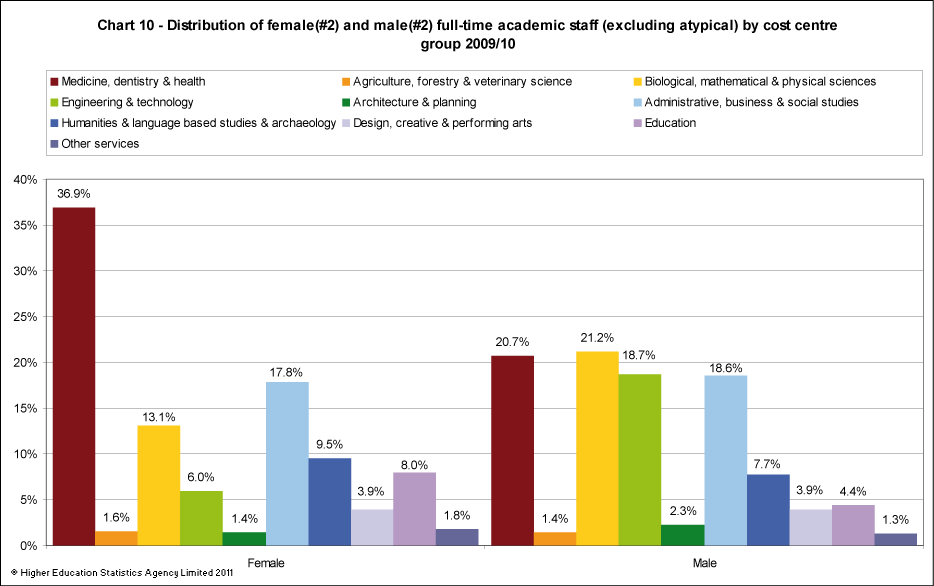 Pattern of employment of academic staff

Chart 11 below illustrates the proportions of open-ended/permanent and fixed-term contract academic staff by mode of employment and gender. 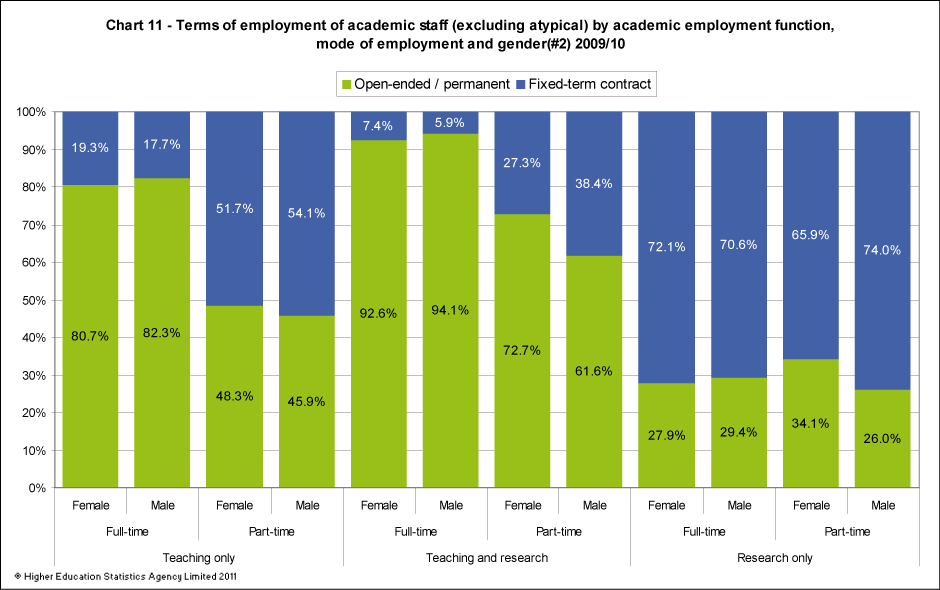