In 2009/10, there were 165 publicly-funded higher education institutions (HEIs) in the UK. HESA holds data on these 165 institutions plus the privately funded institution, The University of Buckingham. The HESA student record does not include any data for The University of Wales (central functions) which has staff but no students. This publication brings together student, staff and finance data collected by HESA at these UK institutions; application and acceptances data from UCAS; student loan information from Student Loans Company (SLC); participation rates from OECD plus contextual population statistics from Office for National Statistics. 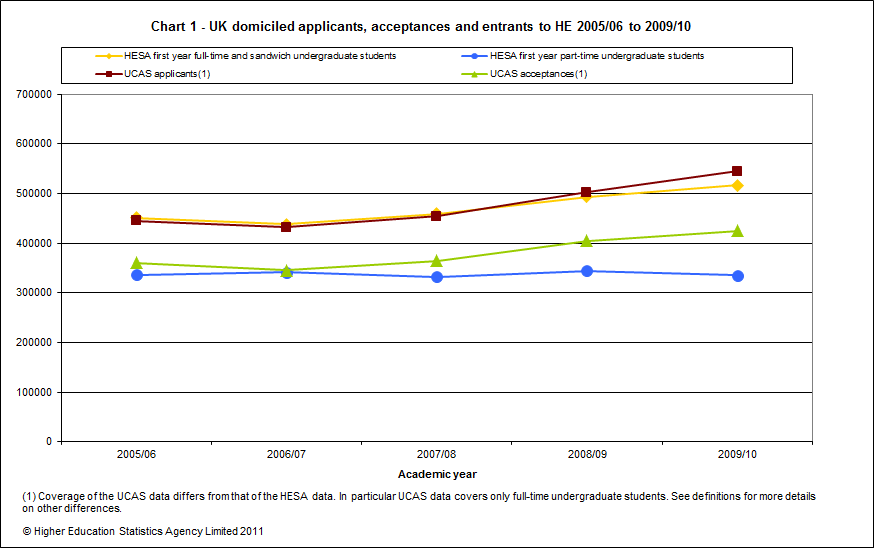 There were 2.49 million students studying for a HE qualification or for HE credit at HEIs in the UK in 2009/10. Over the past five years, the number of HE students studying at UK HEIs has been gradually increasing, an overall increase of 9.3%. Since 2007/08, the increase has been more apparent with an 8.1% rise in the last two years.

An additional 59,835 students were known to be studying at further education (FE) level at UK HEIs, although this is likely to be an undercount as institutions are no longer required to return their FE data to HESA. Data on FE students at HEIs have therefore been excluded from the remainder of the introduction.

Table B [xls 34 KB] provides more detail on students by level of study with comparisons between full-time and part-time, where full-time includes those following a full-time or sandwich programme. It can be seen that a much higher proportion of full-time students were studying for a first degree than of part-time students who were more likely to be studying for another type of undergraduate qualification. For context, Table B [xls 34 KB] also includes data on HE level students studying at FE institutions in the UK.

Equivalent information on students studying at further education level can be found in the current Statistical First Release from The Data Service and the Department for Business, Innovation and Skills.

Nearly half (48.5%) of the 2,493,420 HE students were following a full-time first degree programme. The following pie chart illustrates the breakdown of HE students by level and mode of study. 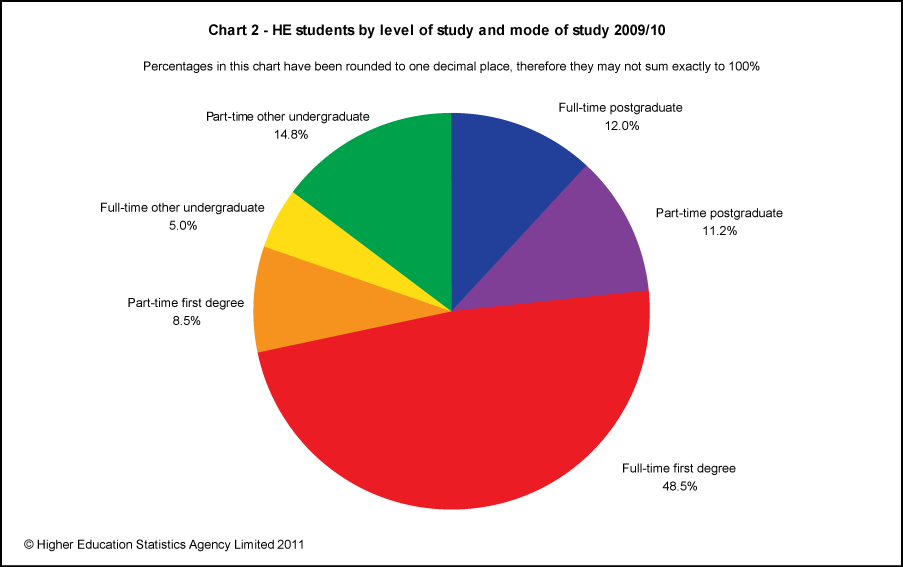 High proportions of other undergraduate students studied subjects allied to medicine (26.1%) and in combined subject areas (15.2%). The high proportion in subjects allied to medicine can be explained because a qualification below first degree level is the norm in many health-related professions, especially nursing. Many Open University students may not initially have to declare their award intention and are reported as studying for institutional credit in the combined subject area. For both postgraduate and first degree students, the highest proportions were studying Business & administrative studies.

Chart 3 below provides the numbers of HE students by subject area and level of study. 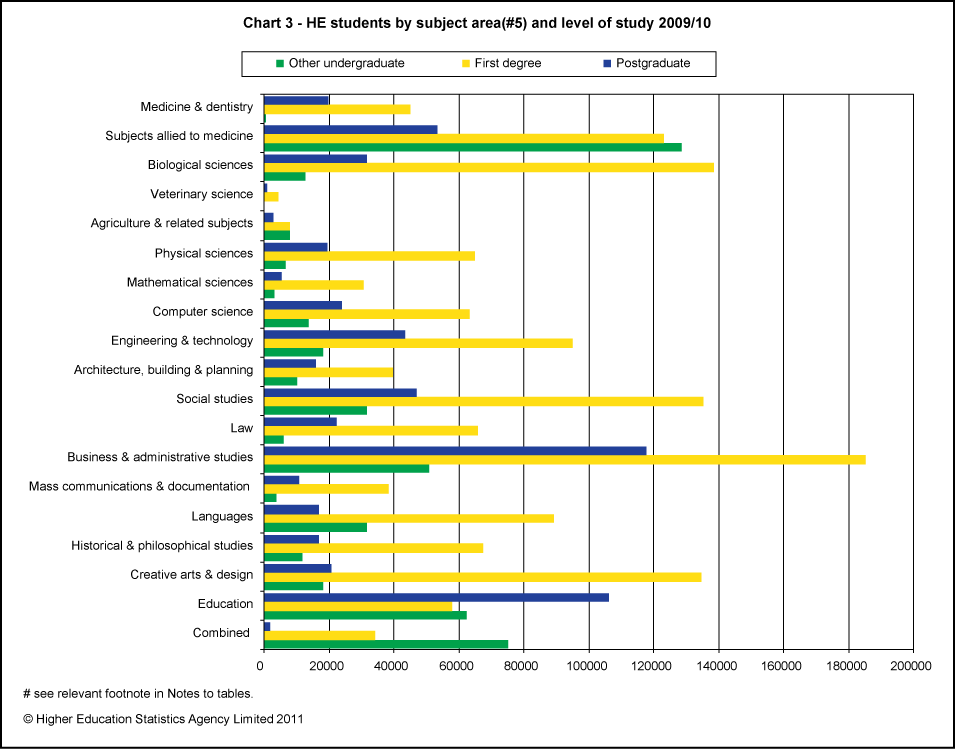 In 2009/10 a total of 716,940 qualifications were awarded at HE level to students at UK HEIs. Of these, 31.6% were at postgraduate level, 48.9% were first degree qualifications and 19.5% were other undergraduate qualifications. Chart 4 below illustrates this.

Over the period of 2005/06 to 2009/10 the total number of first degree qualifiers increased by 11%. This largely reflects the increasing numbers of entrants in earlier years feeding through the system. Table E [xls 33 KB] provides a more detailed breakdown of qualifications obtained for the last five years. 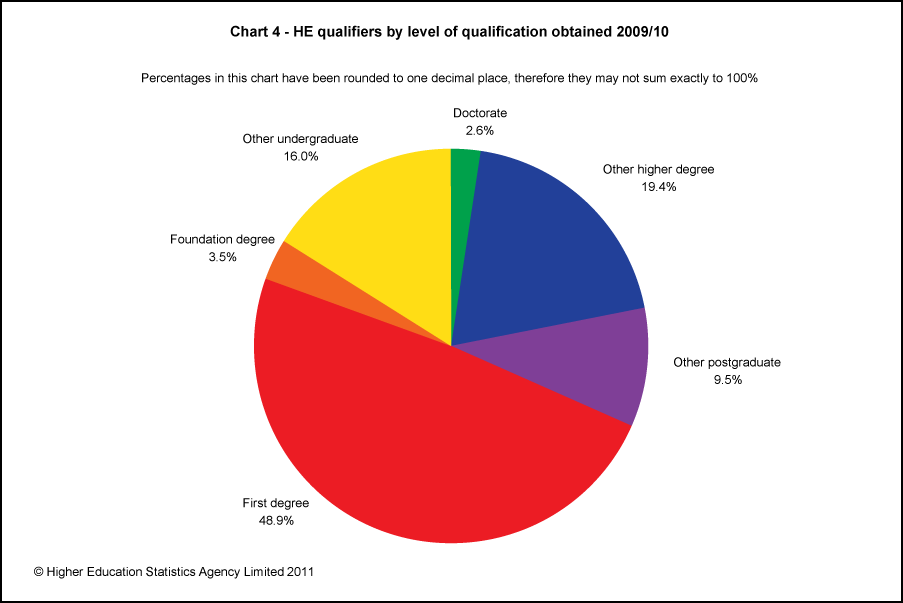 In 2009/10, there were 379,865 qualifier responses of known destination from 501,540 qualifiers within the eligible DLHE population. This gives a percentage with known destination of 75.7%, an increase of 0.4% since 2008/09. A further 15,940 qualifiers replied to the survey but explicitly declined to give information. Including the explicit refusals, the overall response rate was 78.9%. Table F [xls 31 KB] provides a breakdown of leavers’ activity by level of qualification obtained. 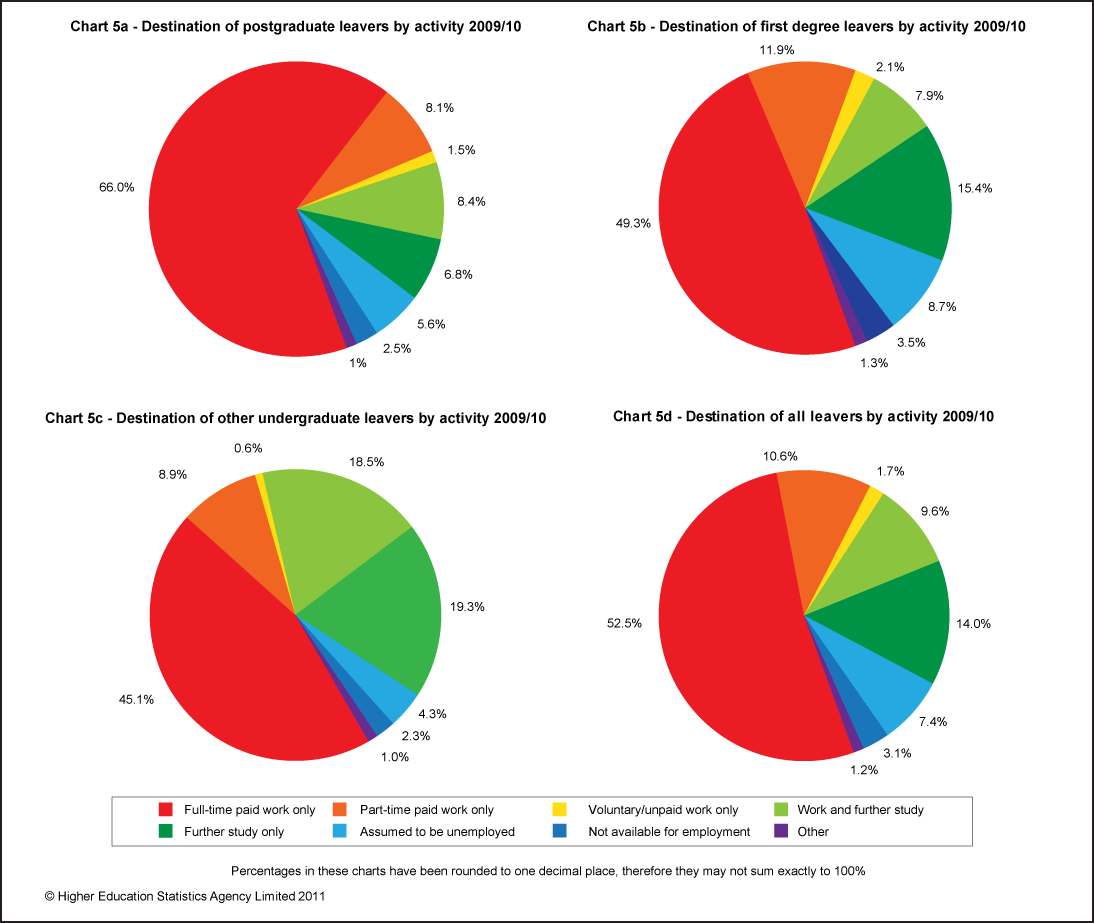 The HESA Staff Record covers all academic and non-academic staff who have a contract of employment with a higher education institution (HEI) in the UK, or for whom the HEI is liable to pay Class 1 National Insurance contributions.

The remainder of the staff figures exclude atypical staff. Table H [xls 32 KB] provides a breakdown by activity and mode of employment for the last five years.

Chart 6 illustrates the increasing trend of both students and academic staff over a five year period. It should be noted that the axis scale for staff differs from that of students in order to express both trends on the same chart. 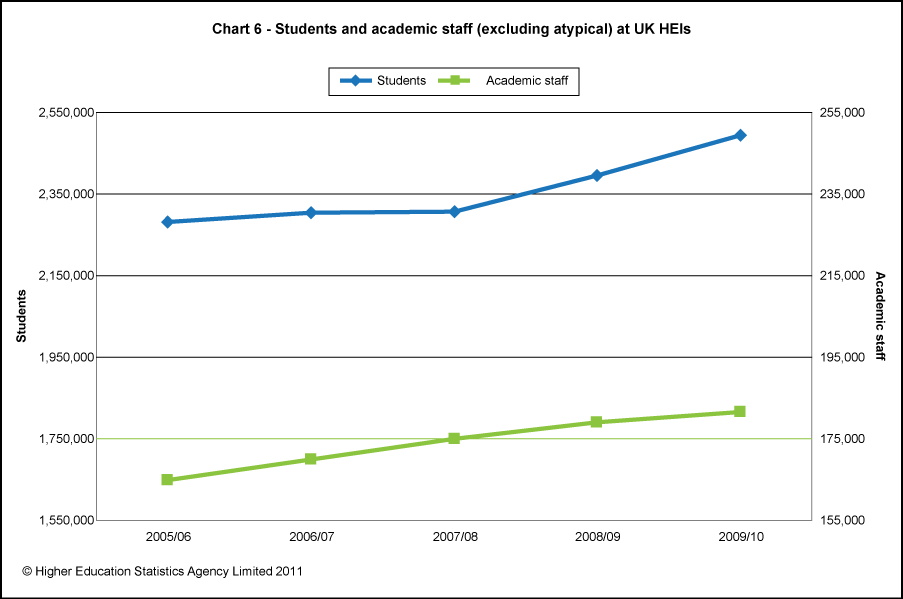 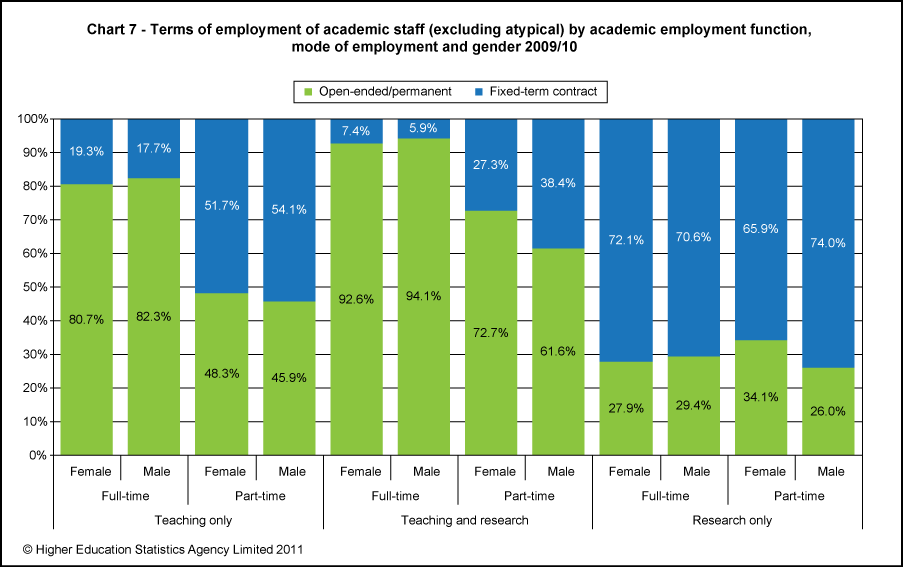 Table J [xls 31 KB] provides a time series of the various income and expenditure streams for the last five years. Chart 8 illustrates the proportional change of the various sources of income over the same period. In particular, the proportion of income from tuition fees and education contracts has increased from 23.9% in 2005/06 to 30.9% in 2009/10. 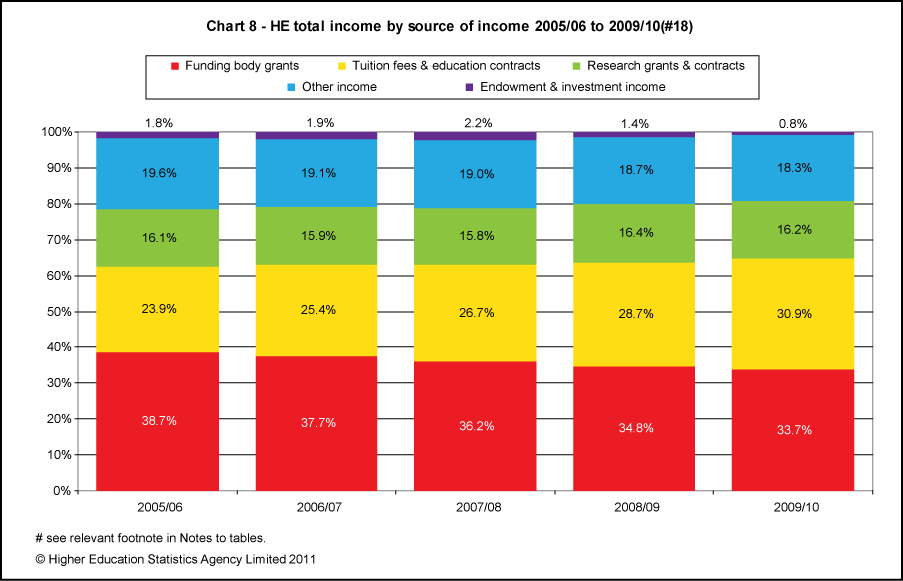