2.55 million students were studying for a qualification or for credit at 165 UK higher education institutions (HEIs) in 2009/10. Of these institutions, 164 were publicly-funded and one, The University of Buckingham, was privately funded.

A small proportion of these students (2.3%) were studying at further education (FE) level.1 Information about FE students studying in HEIs is included in Table A and in two of the main tables of this publication (Tables 1 and 2), but they are otherwise excluded from this publication. All percentages from this point onwards relate to students at HE level only.

Table A provides the numbers and proportions of HE students studying at each level with comparisons between full-time and part-time. Nearly two thirds (65.5%) of the 2,493,415 HE students were following a full-time or sandwich programme. Almost half of all students (48.5%) were following a full-time or sandwich first degree programme. It can be seen that a much higher proportion of full-time and sandwich students were studying for a first degree than of part-time students who were more likely to be studying for another type of undergraduate qualification.

Chart 1 below illustrates the breakdown of HE students by level and mode of study (sourced from Table A). 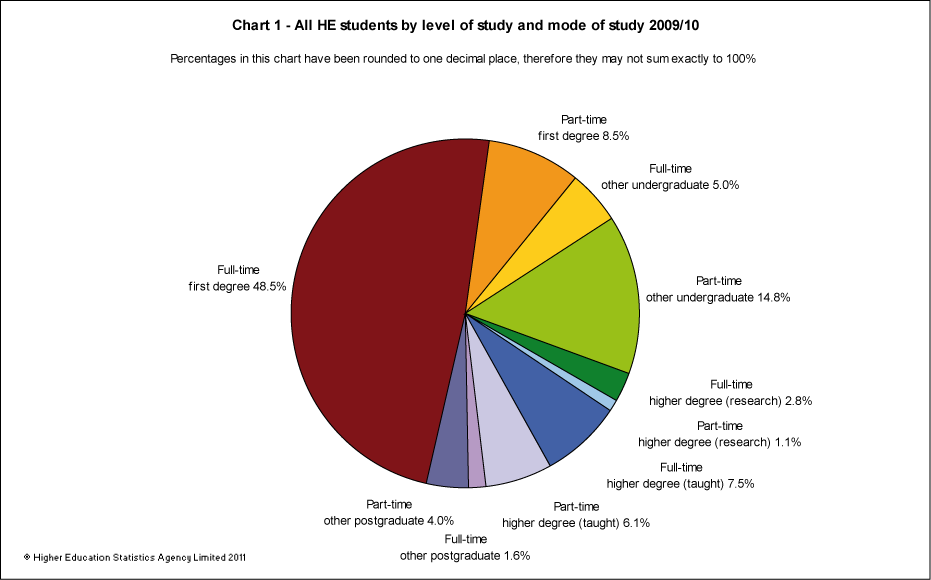 A higher proportion of female students (56.6%) than male students (43.4%) were studying in HE in the UK. This gender imbalance was more pronounced among students studying part-time of whom 61.3% were female. Amongst other undergraduate students, nearly two-thirds (64.7%) were female.

Chart 2 below shows the gender breakdown of HE students by level of study and mode of study (sourced from Table C and Table D). 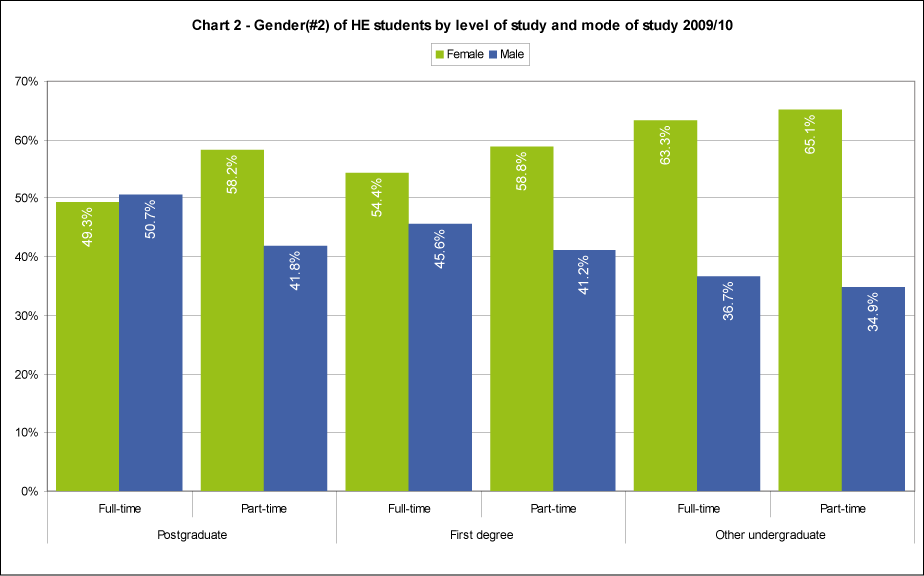 Although a large proportion of students studying in the United Kingdom were domiciled in the UK before they entered Higher Education (83.7%), a further 5.0% were from other countries within the European Union (EU) and 11.3% were from countries outside the EU.

Among undergraduate students from outside the UK, the highest proportions came from Asia (38.9%) and the EU (38.5%). The next highest proportions were from Africa (7.5%), the Middle East (5.2%) and North America (5.1%). Table 8 of this publication gives details of the countries with the highest numbers of students studying in the UK. Much lower proportions of non-UK students studied part-time than full-time, especially among non-EU students. Table B provides a summary of students by domicile and gender.

Chart 3 below shows the proportions of non-UK domiciled undergraduates by region of domicile (sourced from Table D). 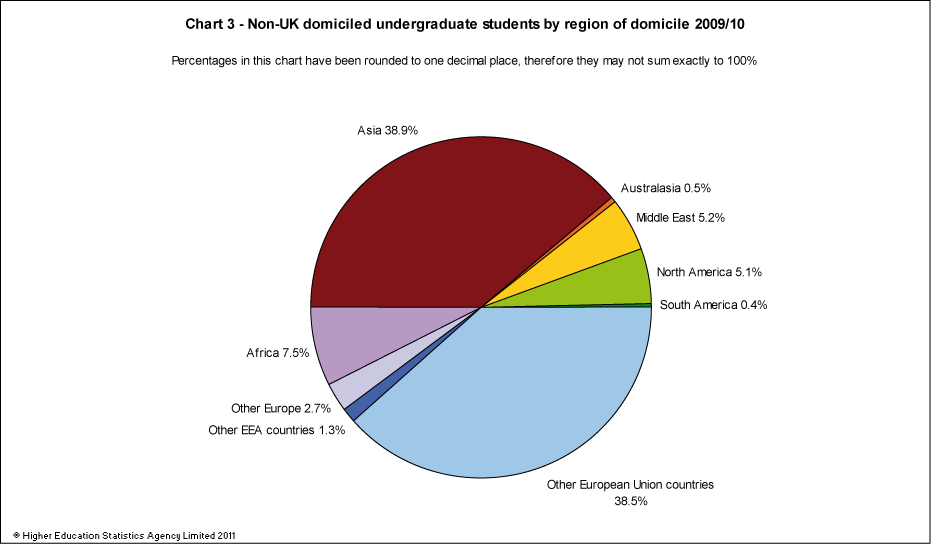 Although females were in the majority within the whole student population, this was not the case across all geographic regions. For UK students, 58.4% were female, the second highest proportion after Other European Economic Area (59.8%) and closely followed by North America (58.1%). The lowest proportions of females were observed among students from Africa (39.6%) and the Middle East (31.2%).

Table C and Table D provide a more detailed breakdown of the postgraduate and undergraduate populations.

Chart 4 below shows the considerable gender variations apparent in the breakdown of HE students by both level of study and domicile (sourced from Table C and Table D). 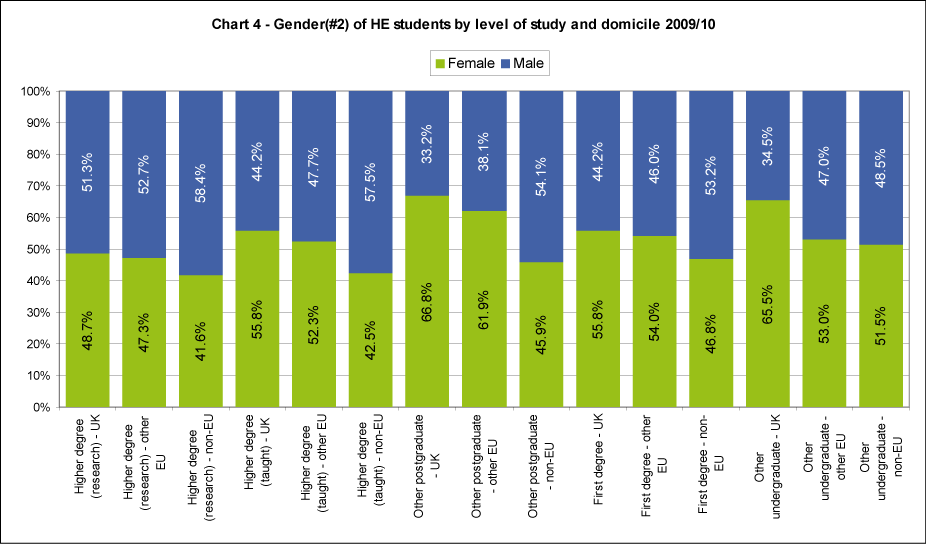 Table E shows the percentages of students at different levels who were following programmes in each of 19 subject areas. A detailed explanation of the subject areas, and the way in which student numbers are apportioned between them, may be found in the definitions section of this publication.

There are two figures at the ‘Other undergraduate’ level that are worthy of comment, those for subjects allied to medicine and combined. The high proportion in subjects allied to medicine can be explained because a qualification below first degree level is the norm in many health-related professions, especially nursing which attracts a large number of female students. Many Open University students may not initially have to declare their award intention and are reported as studying for institutional credit in the combined subject area.

Chart 5 below provides the numbers of HE students by subject area and level of study (sourced from Table E). 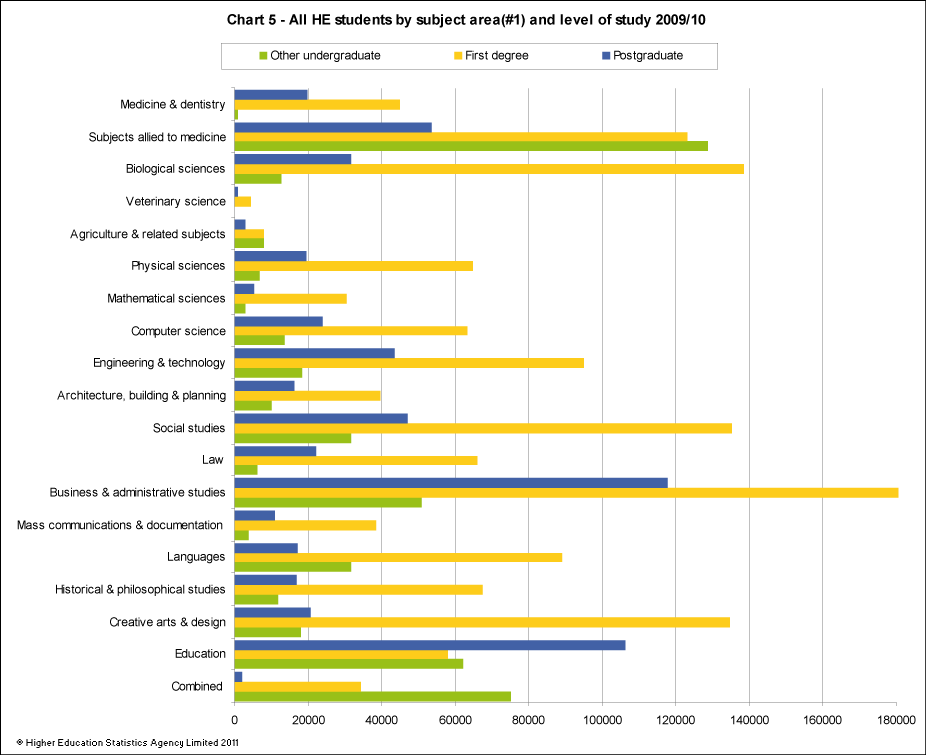 Students from outside the UK were well represented in business & administrative studies, engineering & technology, computer science, law and mathematical sciences. 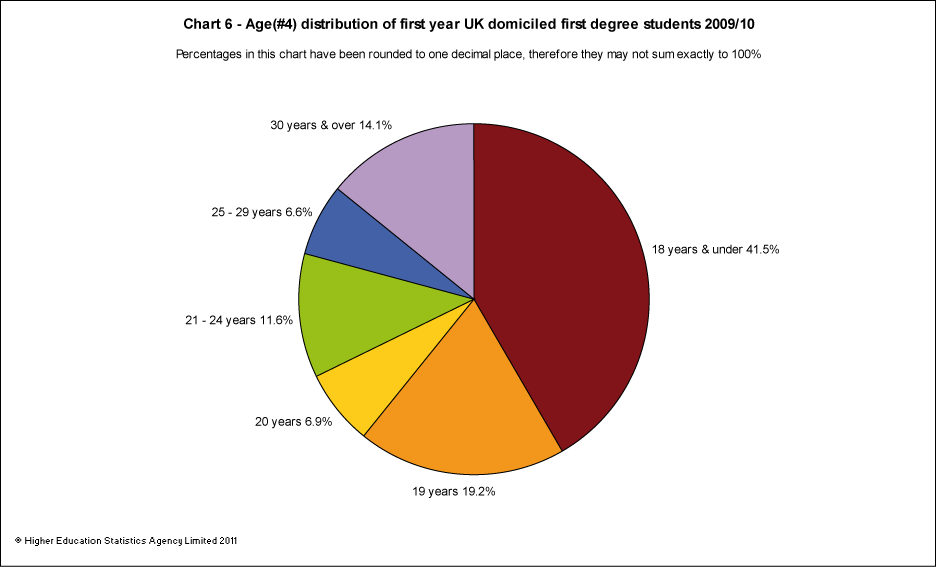 Ethnicity is recorded using the categories available for the 2001 Census (details can be found in the Definitions section). These categories are then amalgamated following Office for National Statistics guidelines into the smaller number of categories shown in Chart 7 and in main tables. The scheme is designed to describe patterns of ethnicity within the UK domiciled population; information on ethnicity is required by HESA only for students of UK domicile.

Ethnicity is known for 96.0% of UK domiciled first-year undergraduates and 94.9% of UK domiciled first-year postgraduates. Taking first-year and continuing students together, it is known for 96.9% of undergraduates and 94.1% of postgraduates (from Table 13). Participation in HE by students from ethnic minorities continues to increase overall and accordingly the most up-to-date picture is obtained from consideration of the position for new entrants. 17.8% (17.6% in 2008/09) of all first-year students of known ethnicity are from ethnic minorities and for full-time first degree students the figure is 21.2% (21.3% in 2008/09).

Table I provides the percentage of first year UK domiciled ethnic minority students by mode and level of study.

There are substantial differences in participation of ethnic minorities across subject areas which are published in Table J and Chart 7 below (sourced from Table J). 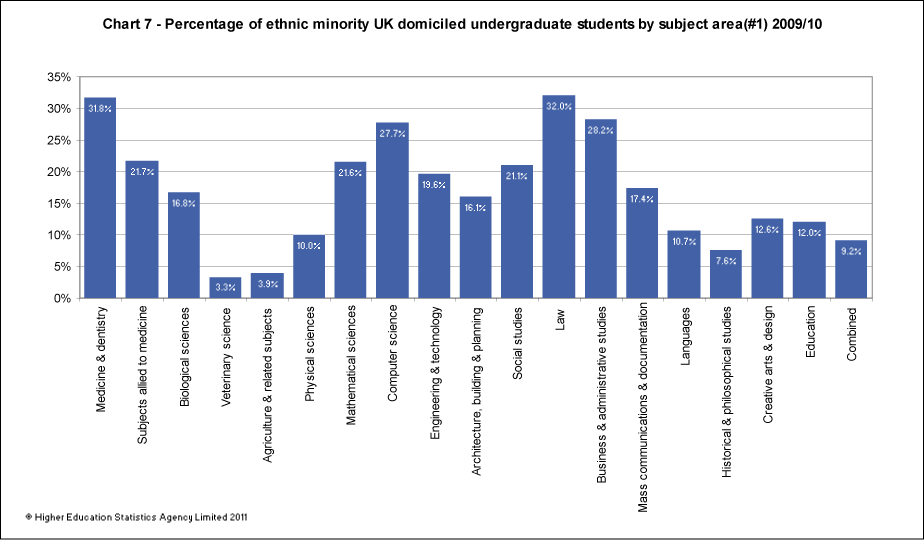 In 2009/10 a total of 716,940 qualifications were awarded at HE level to students in publicly-funded HEIs (together with The University of Buckingham) or on indirectly funded HE programmes in Further Education Colleges (FECs). Of these, 31.5% were at postgraduate level, 48.9% were undergraduate first degree qualifications and 19.5% were other undergraduate qualifications. 24,865 foundation degrees were awarded, 3.5% of the total. Table K provides a more detailed breakdown.

Chart 8 below provides a breakdown of HE qualifications obtained by level of qualification (sourced from Table K). 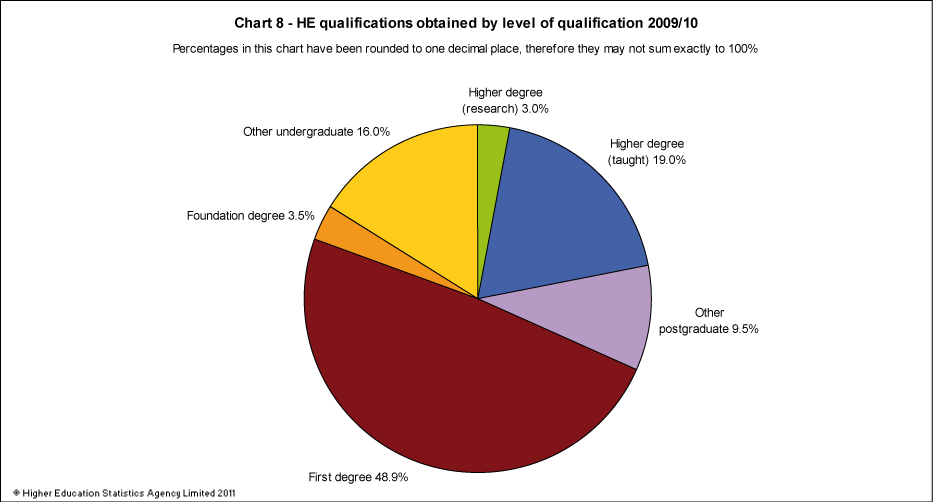 22.3% of all HE qualifications were awarded to non-UK domiciled students. This figure rose to 57.5% of all taught higher degrees awarded.

Table L provides a breakdown of the class of award for first degree qualifications. 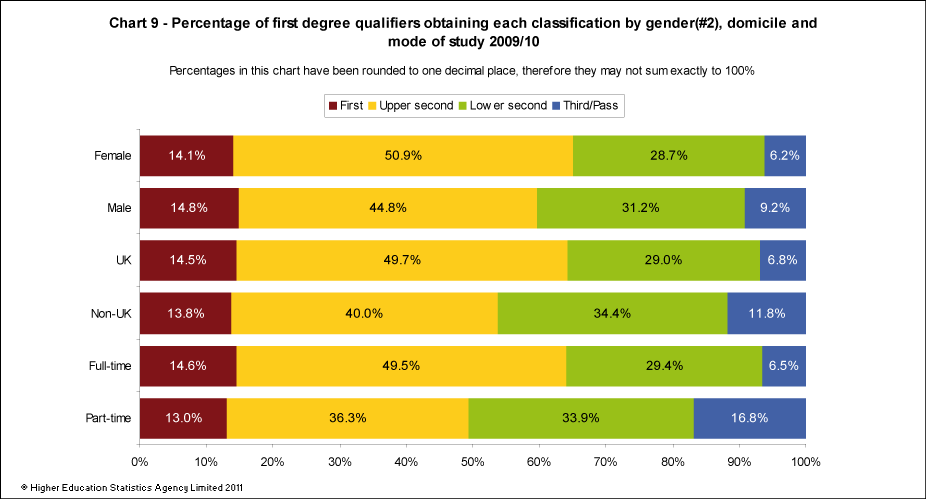 Table M shows that there was considerable variation by subject area in the proportions of different classes of degrees that were awarded. This table excludes the clinical subject areas medicine & dentistry and veterinary science, in which the majority of degrees awarded are not subject to classification.

The gender, mode and domicile proportions vary greatly across subject areas (see Table F), and therefore it is not meaningful to analyse class of degree without adjusting for subject choice.

The main tables provide figures showing student mobility within the UK for all UK domiciled students. However, the figures for postgraduate students should be interpreted with caution because the domicile will often reflect the location of undergraduate study rather than the original ‘domestic’ domicile. Part-time students display little mobility and thus Table N focuses on full-time undergraduates.

Chart 10 below provides the percentage of full-time UK domiciled first degree students studying in each region by domicile (sourced from Table N). 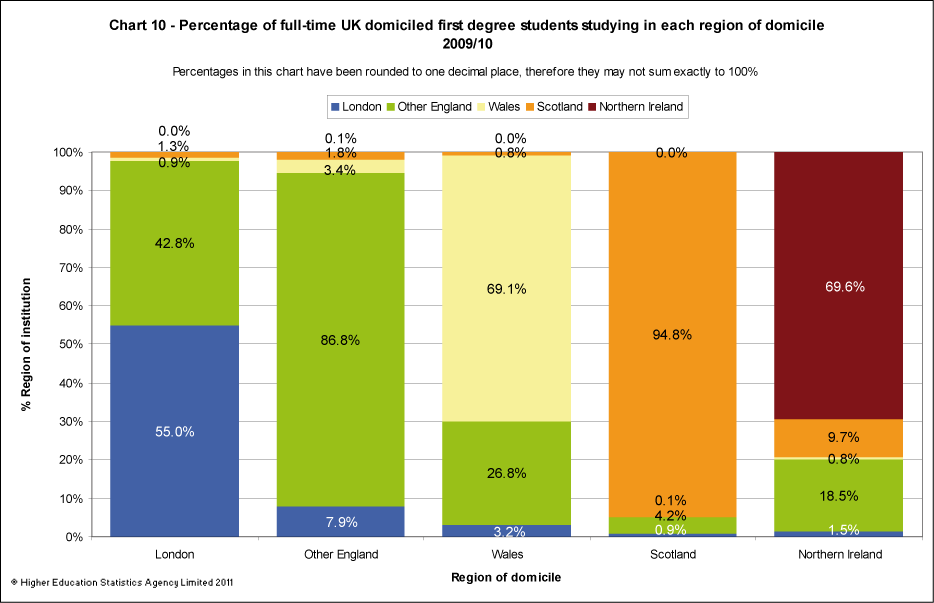 95.3% of full-time first degree students domiciled in England studied in their country of domicile; the corresponding figures for the other UK home nations were 69.1% for Wales, 94.8% for Scotland and 69.6% for Northern Ireland.

English and Scottish students displayed little mobility in proportionate terms. However, in absolute terms England contributed almost half of the students studying in Wales and more than one-eighth of those in Scotland. Outwards mobility from Wales and Scotland was almost entirely to England and two-thirds of outwards mobility from Northern Ireland was to England, with almost all the balance to Scotland.

Within England, again for full-time first degree students, the flow into London was 54,290 and the flow out of London was 71,770, not greatly different in absolute terms, which means that there was proportionately much more mobility out of London to other regions of England (42.8% of the London total) than in the reverse direction (7.9% of the total for other regions of England). The table in the main body of the publication provides a full breakdown of mobility between English regions.

There was less mobility between all but one of the administrations at the level of full-time ‘Other undergraduate’ programmes than at the first degree level: the corresponding percentages for study in the country of domicile were 99.2% for England, 78.8% for Wales and 92.7% for Scotland. The equivalent figure of 39.9% for Northern Ireland at first appears anomalous when compared to the other administrations. This is due to a much smaller level of full-time other undergraduate provision at Northern Ireland institutions.

‘Offshore provision’ is the term used to describe study taking place entirely outside the UK. However, where the students either are registered at a UK HEI, or are registered with a partner organisation in the country of study but are working towards a qualification awarded by a UK HEI,2 such students are termed ‘offshore students’. It is thought that the publication of offshore provision has substantially increased in recent years but quantitative evidence has not been available. Up to and including 2006/07, data on offshore students was collected at the individual level through the HESA student data collection using a simplified record structure (a ‘reduced record’), but submission of this part of the collection was optional for institutions and it was known from other evidence that the reported total of just under 80,000 offshore students greatly underestimated the total level of activity. Because of this, HESA did not include material on offshore provision in the student publication prior to 2007/08.

One outcome of the review of the student record for 2007/08 onwards was the discontinuation of the use of a reduced record for offshore students, since that level of detail was not required. A separate aggregate collection was designed to obtain the required data. Government departments in the four administrations then decided that the financial and reputational significance of offshore provision to UK HEIs individually, and to the UK HE system as a whole, meant that for policy purposes it was necessary to have full coverage; to achieve this they decided to use their powers under legislation to make that aggregate collection mandatory. In consequence, from 2007/08 it was possible to publish information on offshore provision.

Table O provides a breakdown by level of study and by the nature of the relationship with the student, and is disaggregated between EU and non-EU provision.

Chart 11 below illustrates the proportions of students studying wholly overseas by type of provision (sourced from Table O). 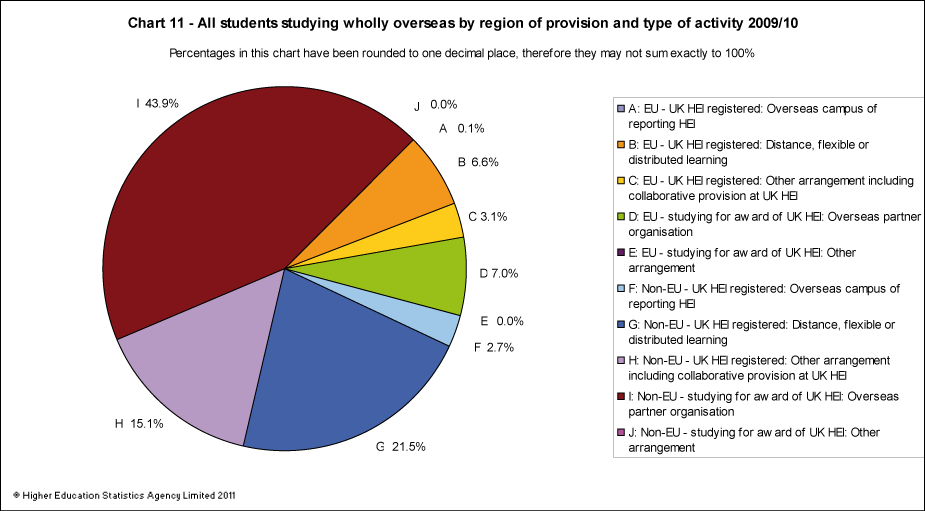 Within the EU, the largest numbers of students were registered with a UK HEI (58.4%). Distance learning appeared to be the most common form of relationship for these students, accounting for over two-thirds (67.6%) of the group. The number of students at overseas campuses within the EU was relatively small at only 420 students. Overseas partnership arrangements, in which students are not registered at, but are studying for awards of, a UK HEI accounted for 41.6% of EU offshore students. With regard to level of study, the majority of EU offshore students were studying at first degree level (61.9%), mainly through distance learning and partnership arrangements, particularly those where the students are not registered at the UK HEI. There were also sizeable numbers studying on taught postgraduate courses (31.7%).

Table P shows the breakdown by level of study for the 20 countries with the greatest level of offshore provision. Almost three-quarters (72.3%) of all offshore provision was concentrated within these countries. The largest numbers of students were observed within Malaysia, Singapore, Hong Kong (Special Administrative Region of China) and Pakistan, which between them accounted for one-third (34.0%) of all HE offshore students. Only three EU countries appeared within the top 20: Ireland, Greece and Germany.

1 This number is lower than in preceding years because some of the most heavily ‘mixed-economy’ HEIs in England no longer report their FE student numbers through HESA.

2 The University of Wales (central functions) has no students within the UK and so does not appear in this publication except in respect of its offshore students.