This publication is one of four reference volumes published annually by the Higher Education Statistics Agency (HESA). HESA is a company limited by guarantee, and is owned by the United Kingdom (UK) higher education sector through the representative bodies Universities UK and the Standing Conference of Principals. HESA collects data from publicly funded higher education institutions (HEIs) in the UK on behalf of funding bodies and government departments, in a framework underpinned by legislation.

This volume brings together information about the finances and the staff of HEIs during the academic year 2002/03, that is, the period 1 August 2002 to 31 July 2003. It covers data supplied by 171 HEIs (133 in England, 141 in Wales, 20 in Scotland, 4 in Northern Ireland). The data collection procedure is uniform across all institutions, regardless of size, nature, and location. Tabulations are included which record and analyse income and expenditure, and the characteristics of staff, at the institutional level.

The other reference volumes published by HESA are as follows.

Students in Higher Education Institutions. This volume draws on HESA’s collection of data about students in HEIs. It includes information at the institutional level about entry qualifications, programmes taken, and outcomes, together with background variables such as age, gender, ethnicity, social class, and disability data on HE provision in further education colleges (FECs) is not included in this volume except for students funded indirectly through HEIs, in which case it is reported by the HEI through which funding passes.

Destinations of Leavers from Higher Education Institutions. This volume draws on the newly introduced Destination of Leavers (DLHE) survey, the successor to the First Destinations Supplement (FDS), and provides information about patterns of employment and further study or training at a point about six months after completion. DLHE covers leavers from part-time as well as full-time courses, a major extension relative to FDS.

Higher Education Statistics for the United Kingdom. This is the only HESA reference volume that currently falls within the National Statistics framework, and it accordingly carries the National Statistics logo as well as that of HESA. It provides an overview of higher education in the UK from a statistical perspective, including statistics about applications, participation, institutional finance, staffing, student awards, and loans. To achieve this broad coverage, this volume draws on data collected by other bodies as well as HESA, and in particular includes some information about directly funded HE provision in FECs.

HESA also publishes annually two Statistical First Releases within the National Statistics framework; the Higher Education Management Statistics at sector and (on CD) institutional level; detailed data for institutional planning purposes on CD (HE Planning Plus and HE Finance Plus); and occasional Research Datapacks. The HESA Information Provision Service exists to meet more specialist needs of data users on a bespoke basis.

Due to the provisions of the Data Protection Act 1998 and the Human Rights Act 1998, HESA implements a strategy in published and released tabulations designed to prevent the disclosure of personal information about any individual. These tabulations are derived from the HESA non-statutory populations and may differ slightly from those published by related statutory bodies. This strategy involves rounding all numbers to the nearest 5. A summary of this strategy is as follows:

This rounding strategy is also applied to total figures; the consequence of which is that the sum of numbers in each row or column will rarely match the total shown precisely. Note that subject level data calculated by apportionment will also be rounded in accordance with this strategy.

Average values, proportions and FTE values prepared by HESA will not usually be affected by the above strategy, and will be calculated on precise raw numbers. However, tabulations derived from the New Aggregate Staff Record (Tables 17 and 18) will be rounded. Percentages calculated on populations which contain less than 50 individuals will be suppressed and represented as '..' as will averages based on populations of 7 or less.

During the period leading up to the cycle of publications based on 2002/03 data, HESA has consulted widely about the use made of its publications and the changes users would like to see. This has confirmed that extensive use is made of these publications and that there are no tables within them that could be removed without loss. Indeed, users have asked for additional material, both in the form of extra tables and more detailed breakdowns within tables. It would not be practicable to provide some of the detailed breakdowns in a paper publication, and in any event another user request has been to make the material available in a computer-readable form. Accordingly, this year we have greatly reduced the number of printed pages, retaining in the printed format only a limited range of tables, and have included a CD with each copy. The CD contains all the remaining data on the pattern familiar to users from earlier years and supplements this with new and more detailed tables.

The tables on the CD are offered in Microsoft® Excel format (version 5 - XLS extension). This has the further benefit of allowing users to select data from the tables and manipulate how it is displayed. However, arithmetical manipulations should be carried out with caution because of the effect of the rounding strategy described above.

This commentary draws attention to some of the headline figures and key points which emerge from the main tables. The information is displayed graphically where appropriate. It should be noted that where comparisons are made between the latest financial year and a previous year, the previous year’s figures are as re-stated (except where otherwise stated) in the most recent financial statements available. They are not therefore necessarily reconcilable with figures for that year published in previous HESA volumes. However, it is understood that all such figures can be reconciled to the published accounts of the institutions.

Because of rounding, published totals in finance tables may differ from the sum of the published figures which contribute to them.

To provide the context for these figures, Chart 1 shows the HE sector’s surplus/deficit (re-based and re-calculated as appropriate) for each of the years for which HESA now has data. Data were returned to HESA for financial year 1993/94 onwards; figures for these financial years are set out in earlier editions of this volume.

The final table in this section aggregates figures for institutions funded by each of the four UK countries’ funding councils. It should be noted that in this and other tables, The Open University is counted as an institution based in England.

The table and chart below summarise institutions’ sources of income in terms of proportions contributed by and the growth or otherwise of each source over time. 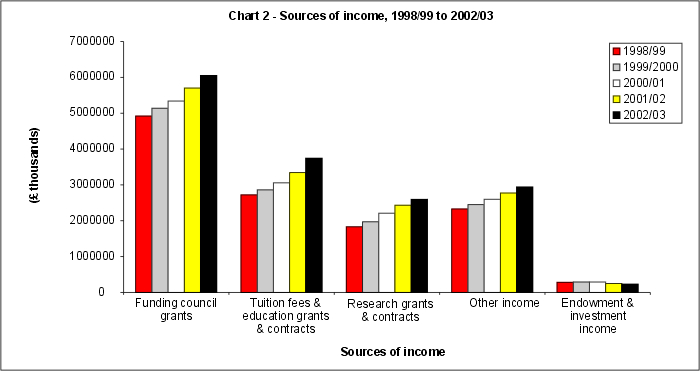 Institutional funds for academic and other purposes are allocated primarily by the higher education funding councils for England, Wales and Scotland, and by the Department of Education for Northern Ireland acting as a funding agency for the four Northern Ireland higher education institutions. Some funds are also provided by the Teacher Training Agency (TTA), and further education funding councils in England and Wales in relation to some categories of FE teaching. (In Scotland it is impossible to disaggregate the funding of FE teaching.)

The total income for tuition fees & education grants & contracts increased by 12% this year from £3.34 billion in 2001/02 to £3.74 billion. Income from overseas students provided 29% of this category’s income.

Analysis by staff grade is meaningful only where institutions have reported their staff within nationally recognised grade structures, or within internal grade structures that facilitate discrimination on a similar basis. Several institutions, including some large post-1992 universities, report their staff on a single grade structure lacking a separate category for the ‘Professor’ grade. Where this happens, Professors cannot be distinguished from staff on the Senior Lecturer (pre-1992) or Principal Lecturer (post-1992) grade, leading to Professors being zero-counted for those institutions and under-counted for the sector as a whole. This under-counting limits the scope of comparative analyses of the proportion of Professors within particular subject areas, by cost centres, by gender, and so on.

While just over one third (39%) of all staff were female, women comprised over a half (56%) of those working part-time.

Overall, 64% of full-time clinical posts were financed other than wholly by the institutions themselves; this compares with 33% for all full-time posts. Women made up 27% of all full-time staff with clinical status.

53% of full-time staff in the academic departments of medicine, dentistry & health and 46% in biological, mathematical & physical sciences were financed other than wholly by the institutions themselves. Departments with the fewest partially or wholly externally funded full-time staff were in the areas of language based studies (7.5%), education (8.7%) and other arts (9.8%).

Since the 2001/02 academic year, the total number of full-time academic staff working in education departments has increased by 2.7% and decreased in agriculture, forestry & veterinary science departments by 5.7%.

(Note: the figures in this section and the following section relate only to full-time non-clinical staff, wholly financed by the institution, unless otherwise stated.)

During the academic year to 31 July 2003, 91% of full-time, non-clinical, wholly institutionally financed academic staff were working in the same institution as they were one year earlier and a further 3.1% had been working in another HEI. A loss of 5,345 staff from the HE sector outnumbered the inflow of 4,535 staff. Retirement was the largest single known reason for departures and the sector gained more staff from overseas than left to work overseas. Caution should be exercised when further analysing staff flows on account of the size of the unknown category.

Chart 3 displays graphically the inflow and outflow by age groups. 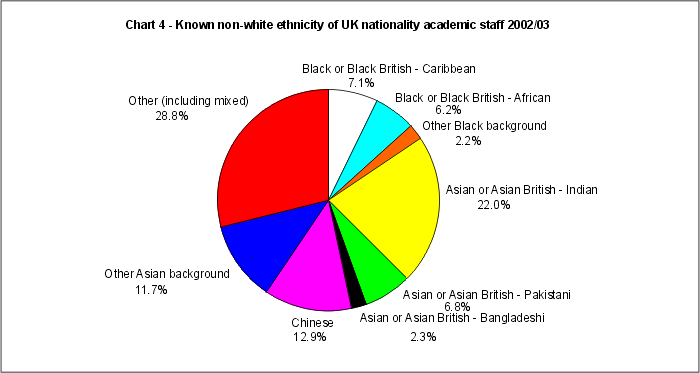 Of the 94% of UK nationality staff who disclosed this information, 1.8% were known to be disabled.

1 The number of Welsh institutions in this volume is different than reported in Students in Higher Education Institutions, due to the inclusion of finance and staff data from The University of Wales Registry.

2 In the 2001/02 volume, it was reported in the summary of key points that there had been a decrease of £128 million in short-term investments. This figure should have been reported as an increase. The figure of £54 million was correctly reported as a decrease in 2000/01. In each case, Table A shows the correct figures; the only error was the misinterpretation in the summary of the 2001/02 figure.